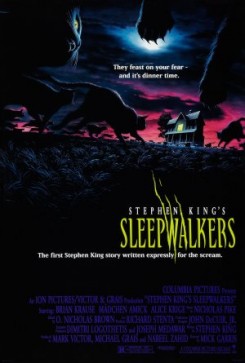 Violence and bloodshed permeate this horror tale about an incestuous mother and teenage son who are "sleepwalkers". Sleepwalkers possess the supernatural power to change shape and form or become invisible at will. Their lives and this power are eternal as long as their thirsts are quenched with human blood. Mary and her son Charles move to a small Midwest town where Charles enrolls in high school. He becomes involved with Tanya, a sweet girl who is flattered by Charles' attentions, unaware that he is more interested in sustenance than romance. A teacher becomes suspicious of Charles and checks his transcript record, which he discovers is phony. When he confronts Charles with his discovery a bloody encounter ensues and the teacher is killed. Refreshed from his thirst- quenching encounter, Charles speeds down a country road in his sports car which catches the attention of Andy, a sheriffs deputy, who give chase in his police car. Charles plays games with the police car until he spots a cat, the police mascot, Clovis, on the seat next to Andy. Charles is terrified of Clovis as cats are the only thing sleepwalkers fear, because cats can render them powerless. Charles disappears and returns home where mom is growing ravenously hungry and blasts Charles for returning without food. He promises that he will bring food tomorrow when he plans to take Tanya on a picnic in a graveyard. During the picnic Charles attacks Tanya but she escapes and alerts the police. This provokes a major battle in which the sleepwalkers seem invincible until Clovis marshals an army of cats who destroy the sleepwalkers.