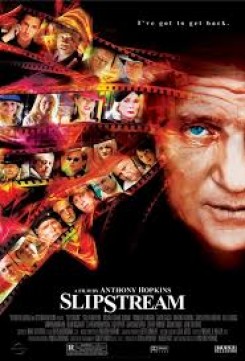 While writing a screenplay, an aging screenwriter (Anthony Hopkins) is baffled when his characters start to appear in his daily life.

A poodle walks down a hallway in a series of flashbacks. For these scenes, a trainer placed the dog on its mark and cued it to walk out of camera range to another awaiting trainer.

A cat appears in a series of flashbacks lying on a couch and being held by Gina (Stella Arroyave). For these scenes, a trainer placed the cat on the couch and verbally cued it to roll over. The trainer held a cat toy out of frame to pique the cat's interest, giving the cat its playful appearance. The trainer handed the cat to the actress right before filming began and retrieved the cat at the end of the take.

A tarantula walks down a pole outside a diner. For this scene, the trainer set the spider on its mark and lightly touched it with a soft makeup brush to encourage it to crawl around the pole. The trainer tested the spider's grip on the pole's surface to ensure that it would not slip and stayed just out of camera frame to catch the spider if it fell. In a later scene, two tarantulas crawl on Felix's (Hopkins) arm and chest. The actor was introduced to the spiders before filming began. The trainer placed one spider on the actor's arm and the other on the front of the actor's shirt. Both spiders had easy traction on the shirt and were collected by the wranglers at the end of the brief take. Rubber tarantulas were attached to the actor for the shot in which he is seen throwing them off.

Vultures sit in a tree and on a fence as Felix exits the diner. The handlers secured the wooden fence at the back before placing the birds on their mark. The birds were secured to the fence and tree with lightweight monofilament lines attached to their legs. They did not resist the chance to sit perched comfortably.

A rattlesnake is in the sand as a script supervisor (Camryn Manheim) collects script pages. The trainer set the snake on its mark and waved his hat near the snake to get it to coil up and to guide it to slither out of frame. The trainer then collected the snake at the end of the take.