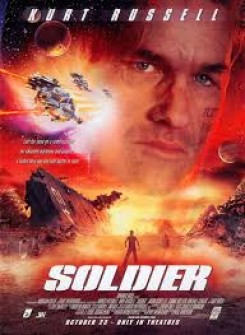 Soldier is a film set in a futuristic society run by military masters. Men are trained as soldiers from birth, but are pushed aside for a "younger, more superior generation". Todd, is one of those soldiers that have been pushed aside and after an encounter with a superior, is presumed dead. He is then dumped on a material waste planet where he becomes a hero who saves the Pioneers and himself from the same forces that tried to kill him.

There is a scene where three Doberman pinchers are in a large cage opposite a caged boar. The cage containing the dogs is open and they are released to attack the boar. This scene was shot in cuts. When the cage containing the dogs was wheeled into the room, a trainer was off camera using verbal and visual signals to cue the dogs to bark.
The wild boar was in a cage at camera left and the dogs were in a cage at camera right. A translucent cubical was placed between the two cages to prevent contact. A trainer was strategically placed in the corner by the boar and checked the boar between each take to confirm that the animal was not stressed in any way. A second trainer stationed under the cubical containing the dogs, used verbal commands to cue the dogs to bark, making it appear as if they were ready to attack the boar. Two boars were used to film this scene. After every take the boar and dogs were rewarded with a food.
When the dogs appear to attack the boar, a trainer cued them to bark, the cage door was opened and they lunged in the direction of the camera, running toward a second trainer who was waiting with their food reward. To accomplish the boar’s look of excitement, a sow was brought in and the boar responded to her presence. At no time did the dogs make contact with the boar.
In another scene, a snake slithers through the garden and a woman supposedly kills it. This scene was shot in cuts. The trainer released the snake at point A in the garden and it slithered towards the camera. A second trainer retrieved the snake at point B. A fake snake and fake blood were used for the segment where the snake’s head is chopped off.
In another scene, a snake slithers across the floor and strikes at a young boy. Todd grabs the snake and tosses it across the room where the boy’s father chops off its head. The actor held the snake in his right hand around the head area and the snake wrapped itself around his hand. The trainer was extremely close at all times. The actor tossed the snake onto a soft fall pad which was held by two wranglers. A fake snake was used when the father appears to decapitate it.
There is a scene where a snake slithers up the bed covers and onto a man’s arm and chest. A small boy grabs the snake and supposedly kills it by hitting it with a boot. This scene was shot in cuts. The head wrangler handled the real snake at all times. He released it and it slithered from point A to point B. Only experienced snake wranglers worked near the snake. At no time did the young boy handle a real snake and a fake snake was used when the boy hits it with a boot.