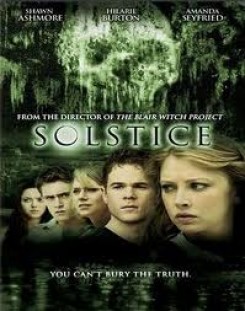 Just months after her twin sister commits suicide, a young woman (Elizabeth Harnois) encounters mysterious occurrences and haunting images as she tries to piece together the major secret her sister was hiding.

The alligator, water snake and gecko were filmed naturally in their own habitats.

Maggots crawl on a watermelon. This was an insert shot, for which the maggots were placed on the watermelon right before filming and removed when the camera cut away.

The old man's dog is seen several times throughout the film. In one scene, the dog is chained to a post near the shed and lunges at Megan (Harnois). For this scene, the trainer placed the well-prepared dog on its mark and cued it to stay. The trainer stood just off-camera behind the shed and called the dog to turn and run. Later, the old man holds the unleashed dog and gently "shoos" him to run through the banana plants to find the girl. For this scene, the trainer stood nearby to call the dog away. The dog's owner stood at the end mark and called the dog to him. The grounds were thoroughly inspected and secured before filming. When the dog reached the owner at the end mark, the trainer used noises and hand signals to get the dog to bark while in a "stand/stay" position, making it look like the dog was confronting Megan. After the take, the dog immediately returned to its placid and friendly demeanor and was rewarded. This scene was filmed in separate shots and edited together in post-production. The actress and the dog were never in close proximity on the set. At the end of this scene, the dog appears to be frightened away by a ghost. For this shot, a trainer called the dog away from the camera, and a whining sound effect was added in later.