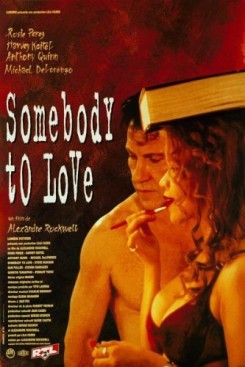 Somebody To Love is a film about Mercedes, a taxi dancer, who also happens to be an aspiring actress. Life for Mercedes is pretty dull until she meets Ernesto. Ernesto immediately falls in love with Mercedes when he sees her dancing at the hall that she works at. They have many special afternoons and evenings together but Mercedes loves another, Harry, who is a "has been" married actor . When Mercedes is in need of ten thousand dollars, Ernesto kills a man for the money and gives it to her, knowing that she is using the money to leave town with Harry. Ernesto himself is killed and Mercedes realizes that no one ever has loved her with a passion like Ernesto's.

There is a scene where Ernesto finds an abandoned kitten in the alley behind the dancing hall where Mercedes works. He picks up the kitten and walks with Mercedes towards her car. When some drunk customers start to harass Mercedes, Ernesto hands the kitten to her and walks towards the men. Mercedes then places the kitten inside her car. Later, at her apartment, the kitten is seen jumping down beside Mercedes as she lays on the floor. She picks up the kitten and walks over to the mirror, petting him. The kitten is later seen sitting on the bed with Mercedes while she talks to Ernesto. For all of the above scenes the trainer placed the kitten on his mark and the actor's either picked him up or the trainer used verbal commands to cue him with food as a reward.

In another scene, while at Harry's house, Harry's wife arrives home early and Mercedes is forced to make a quick exit. While walking home she comes face to face with a coyote. The coyote and Mercedes stare at each other and then the coyote turns and walks away. Mercedes turns and sees the coyote walking down the street. He stops, turns his head, and looks back in her direction then walks on. The animal used in this scene was a half-bred coyote/dog. For the shot of the coyote/dog and the actor staring at each other, the shot was accomplished by positioning the camera behind the actor. The trainer placed the coyote/dog on his mark and used verbal commands to cue him to stay. When the coyote/dog is walking away, trainer #1 released the animal, while trainer #2 used verbal commands to cue him to his next mark. To get the dog to stop and look back at the actor, the trainer, using verbal commands, gave the dog a "stop" command and then using a noise making device cued the dog to look in his direction.

In yet another scene, a dove is seen sitting on a make-up table at the dance hall. A dancer, sitting at the table, picks up the dove and while perched on her finger, the dancer sings. The dove was placed on the table by the trainer and the actor merely picked him up and the dove was retrieved at completion of the shot.

Other animal action consists of a goat seen on a leash in a trailer park and a rooster seen in a window as a lady waves him away. The wranglers placed the animals on their mark and retrieved them after the establishing shots.