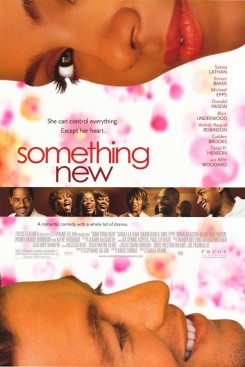 Lovely Kenya McQueen works at a major L.A. accounting firm and is on the verge of making partner. Despite her career success, she has yet to find her own partner and a fulfilling personal life. Kenya, an African-American, agrees to a blind date with Brian Kelly (Simon Baker), but she immediately puts the kibosh on things once she realizes he's white. When Brian comes back into her life to landscape her yard, Kenya begins to rethink her snap judgment and see where the relationship might lead.

Brian's faithful canine companion "Max" was played by three golden retrievers, all of which were acclimated to the cast and crew well before filming began. To achieve the mild animal action seen throughout the film, the trainer would put Max on mark and use a combination of hand signals and verbal cues to get the dog to jump up, lie down, and walk or run in certain directions. A second handler standing off camera retrieved and rewarded the dog for its actions after each take. When Max rode in the truck with Brian, the dog was on a leash held by a trainer hiding in the vehicle.

In a brief scene at the beginning of the film, a woman holds a small dog and waves its paws at Kenya. The dog was placed on the actress' lap, and a trainer stood just off camera to supervise the action.