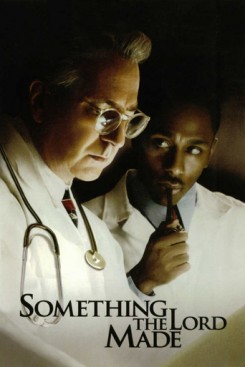 Something the Lord Made

Something the Lord Made is the story of two men who defy the rules of the Jim Crow South and start a medical revolution. Their patients are known as "blue babies" — infants suffering from a congenital heart defect that causes them to turn blue as they slowly suffocate. Alfred Blalock (Rickman) and Vivien Thomas (Mos Def) make a brilliant team, but as they race against time to save one particular baby, social pressure threatens to tear them apart. Blalock is the white, wealthy head of surgery at Johns Hopkins Hospital. Thomas is black and poor, a lab technician whose dream of going to college and becoming a doctor was ruined by the Great Depression even though he possessed the intuition and dexterity of a great surgeon. As they save lives and pioneer a whole new field of medicine, Thomas' professional dreams ultimately come true in unexpected ways.

This film contains moderate to intense scenes depicting surgical operations performed on dogs. To ensure the story's credibility and authenticity, a surgeon from Johns Hopkins University served as an advisor for the production.

Dr. Alfred Blalock begins his work with dogs at the Vanderbilt Experimental Institute. Some cages are stacked up against a wall inside his lab, and additional kennels outside house dogs that appear happy and healthy. All of the cages were inspected by trainers ahead of time and lined with thick fleece pads for comfort. Low wattage light bulbs placed directly outside the cages helped illuminate the lab so that the dogs would show up well on screen. This added lighting created no excess heat for the dogs and was carefully positioned to prevent them from coming into direct contact with the bulbs or electricity.

A few scenes take viewers right into the operating room as the men perform surgery on a dog. Orbit, a 14-year-old golden retriever, made the final performance of his career as the "patient" in one sequence; the veteran animal actor has since retired from the glamorous world of show biz. With two fleece pads cushioning the operating table and a towel for a pillow, the trainer situated Orbit comfortably on his back and proceeded to pet, message and talk to the dog until he became so calm that he fell asleep for most of the scene! The director actually had to stop filming at one point because Orbit slept so soundly that his snoring sent the cast and crew into fits of laughter.

The props department crafted a specially fitted piece of fake belly skin, backed by a metal plate, to insure that no cutting implement would go near Orbit's stomach. Once the dog was resting comfortably on the table, a trainer used surgical tape to attach a plastic tube to the dog's front leg to simulate an IV line. A small blood pressure cup was also wrapped loosely around Orbit's other front leg. During post production, a bit of CG blood was added into the scene. As a backup, the production fabricated a prosthetic dog — also fitted with a fake belly — just in case Orbit decided to retire earlier than the director anticipated. As it turns out, Orbit never needed this stand-in.

In another scene, a young dog lies on the operating table as Vivien shows another doctor that the animal's gums are blue. A 16-week-old golden retriever named Bang performed in this scene. This dog was placed on his back and a trainer used a cotton swab to apply some Very Berry Kool-Aid mixed with a small amount of water to the gums right before filming began. A rolled up towel rested under the dog's head for support and he was covered with a light-weight sheet that allowed the trainer to discreetly scratch the dog's belly during the entire scene. These caresses not only calmed the pup but also kept him safely on the table. The Kool-Aid stain disappeared from the gums within 20 minutes.

Vivien is later seen holding a dog with a bandaged stomach. The surgical advisor and the trainer on set taught the actor how to gently apply the bandage, and afterward Vivien picks up the dog and gives it hugs and kisses. On the second take, the dog became so relaxed in Mos Def's arms that it fell asleep. The camera was positioned behind them, though, so unfortunately, this sweet image will not show up on film. And neither will the snoring — thanks to the wizards in the post production department!

Dr. Blalock brings a priest into the lab one day and they find Vivien sitting on the floor holding an injured dog. There is blood on his paw and shattered glass and blood litters the ground nearby. When originally filmed, this scene was much longer than it appears now.

On a low shelf under a table, trainers set up some beakers and bottles made out of candy glass (a type of "glass" made from sugar for use in movie stunts). One trainer showed the dog his favorite stuffed toy and then tossed it near the shelf. The dog was unleashed and chased after his beloved toy, knocking over the bottles and beakers along the way. The trainer retrieved the dog and applied fake blood to the bottom of his feet before allowing the dog to run around loose and leave bloody footprints on the floor. The images cut from the film showed the dog running loose in the lab and knocking over and cutting himself on some glass before Vivien came in and found him.

Careful observers may notice a horse and cart on the street as Vivien and Clara walk downtown and chat. These so-called arabber carts are part of Baltimore's rich history and were also used on the upcoming John Travolta film Ladder 49. According to the Arraber Preservation Society home page, 'arabbing' is a term used to describe the activities of a group of small-scale entrepreneurs who hire horses and carts to carry a variety of food items to the neighborhoods of Baltimore.

Another horse, named Chester, appears in the film attached to a small wooden buckboard wagon; four trainers walked alongside the horse to help guide it. Antique cars fill the street in both scenes, and the experienced drivers were all equipped with radios to speak to crew members as well as the trainers when necessary. The movement of the cars was tightly choreographed to ensure the horse's safety, and any pigeons seen were indigenous to the area.

Animal Research, Then and Now

Opinions on animal testing have changed quite a bit between the era represented in Something the Lord Made and today. Scientific knowledge has advanced exponentially since the 1930s, and a considerable portion of the medical community supports the goal of eventually eliminating the use of animals in clinical research altogether. Although the notion of practicing surgery on dogs now seems abhorrent, the incalculable contributions made by Blalock and Thomas to the field of cardiology cannot be denied. Viewers may be interested in knowing that Johns Hopkins University, the facility where much of the surgeons' breakthroughs took place, created the Johns Hopkins Center for Alternatives to Animal Testing in 1981. According to the CAAT, "the best science is humane science", and their programs strive to provide a better, safer, more humane future for people and animals.