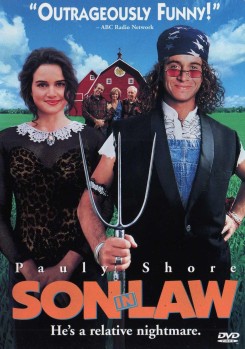 The Son-In-Law is a wacky comedy about a wholesome country girl who bids farewell to her folks in South Dakota as she eagerly flies off to attend a hip California college. The culture shock is too much for Becca and she's miserable until she's befriended by the dorm resident advisor, Crawl. Crawl is a walking psychedelic nightmare, with a personality as wild as his wardrobe. He transforms Becca into his female counterpart, which chases her blues away. Becca brings Crawl home for Thanksgiving, where his antics rapidly disrupt life on the farm. When Becca's old boyfriend publicly asks her to marry him in front of a large gathering, Crawl senses her reluctance and saves her from further embarrassment by announcing that Becca has already accepted his marriage proposal. Becca's family is less than thrilled with the unexpected announcement. When Becca's dad asks the perennial student, Crawl, how he will support Becca, he says he wants to learn how to be a farmer. Farming proves to be quite a challenge for Crawl, when the farmhands play a few tricks on him and he meets further antagonism from Becca's jealous ex-beau. Crawl perseveres however, and in the process manages to teach the farm folks a few lessons in living.

Crawl has several confrontations with animals, thanks to the mischievous farmhands, as the city slicker attempts to adjust to life on the farm. While Crawl is feeding several pigs at a trough, one large pig is let loose and charges Crawl, knocking him down into the mud. Later, when another huge pig is released to charge Crawl, he hops onto the pig's back and rides him like a pony. When the pigs charged at Crawl, in both instances they were merely going from A to B in response to verbal and visual cues from their trainers who were off camera. The actor feigned being knocked over when he fell into the mud. However, he did hop onto the pig's back and ride him. The pig was strong and large enough to carry the actor and did not mind, as he was more interested in the food reward he was running to receive. One of the farmhands gives Crawl a hatchet and sends him into a turkey pen, where he is supposed to kill the Thanksgiving turkey. Instead, the huge menacing bird stalks him. When Crawl is cornered, he lets out a blood-curdling yell and the turkey keels over. This scene was shot in cuts. A turkey was filmed moving from one point to another with food as a reward. The part where the turkey keels over, was shot separately by having a veterinarian sedate a turkey. After the injection, the bird was gently placed in a sitting position and released as he rolled onto his side. AHA's rep was present and the bird recovered with no ill effects. Later, with the family gathered in the kitchen and the "dead turkey" lying in the sink, Crawl is told to pluck the feathers from the bird. As he reluctantly goes to pull out a tail feather, the bird suddenly springs to life and flies about the kitchen as the family tries to catch the bird. This scene was also shot in cuts. For the turkey lying perfectly still in the sink, a dead turkey was purchased and placed in the proper position. As the actor plucked a tail feather, an off camera crew member moved the turkey to simulate the turkey's reaction. Where the turkey comes to life, a turkey that had been trained to lay down was used. The trainers gave visual and verbal commands causing the turkey to get up and run around. The actors reacted in a state of confusion and pandemonium as the turkey ran out of the kitchen. Two cameras were placed at different angles and different distances to make it appear that the scene was longer than it actually was. The filming with the purchased dead turkey was done on a separate day than the scene with the turkey and the family in the kitchen. The passage of time in the film is marked with a rooster crowing at the break of each new dawn. In the final shot with the rooster, a shoe is hurled at the bird as he flies up into the air. To achieve this, the rooster had been trained to fly into the air in response to the sound of a buzzer with food as a reward. The timing of the bird's response and the shoe toss was worked out so that there was no contact between the bird and the shoe. A variety of other farm animals are seen in mild action, such as a bull, cows, chickens, and ducks. In one scene Crawl is taught how to milk a cow. A dog and cat are also seen briefly. When Crawl is taken fishing with Becca's father and grandfather, a fish is reeled in on a hook. Crawl holds up the fish as it moves side to side, then gently releases it back into the water. For this scene a dead trout purchased from a market was used. The actor held the fish in his hand, shaking it to simulate a live fish wiggling.