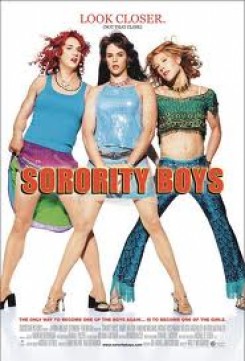 WB television heartthrobs Barry Watson (7th Heaven) and Michael Rosenbaum (Smallville) star in this Porky's-esque college romp about 3 guys who are kicked out of their treasured fraternity after being framed for theft. Determined to clear their names and get back into the frat house, the guys infiltrate their old house by posing as women and joining a nearby sorority of misfits. Comedian Harland Williams rounds out the trio as the frat's resident slacker.

In the Dog House

A dog named Brutus makes a brief appearance in the frat house as a girl takes the "walk of shame" out of one of the guy's bedrooms. Brutus sits in the hallway amongst a throng of chanting guys who are teasing the poor girl. A trainer stood in the hallway opposite of Brutus and cued him to look at her, while another trainer stood behind the dog to hold his "stay" command and keep him out of the crowd.

What You Don't See

Brutus had an extended role that most of which, unfortunately, was left on the cutting-room floor. In a dramatic turn, Brutus sat on a bed with an actor and listened intently as the actor poured his heart out to the caring dog. Actually, a trainer placed the dog on his mark and kept him looking at the actor by placing some treats in the actor's shirt pocket. In several other deleted scenes, Brutus barked at a frat guy and sorority girl and even got to sing. In both instances, a trainer cued the dog off-camera to achieve these actions.

Production also purchased 3 Alaskan Dwarf Hamsters to add ambience to the background of certain scenes. They stayed in their terrarium and ran on their wheel and were adopted by the propmaster after filming was complete.