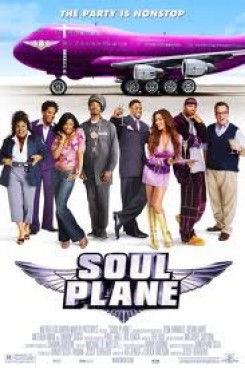 After a humiliating experience on a commercial flight, Nashawn Wade (Hart) sues the airline and wins a $100 million settlement. Determined to make good with his newfound wealth, Nashawn decides to create the airline of his dreams. With the help of his cousin Muggsy (Method Man), Wade creates N.W.A. Airlines, the first full-service carrier catering to the urban traveler. Departing on its maiden voyage from the all-new "Terminal (Malcolm) X" in Los Angeles, Soul Plane gives "flying the friendly skies" a whole new meaning.

Desperate to catch his flight, Wade sprints through the airport carrying his dog Dre in his arms. Intentional or not, the canine mysteriously ages as they run; when they finally reach the gate, a full grown dog sits beside Wade. A crew member tells him that Dre is too large and must ride in a crate in the plane's cargo area, so Wade puts the dog into the crate and the crew member tosses it casually out the door. Later, the cargo area shudders when a gaping hole opens on the side of the plane and luggage begins to fall out. Dre's crate shakes lose and Wade sees his beloved dog get sucked into the plane's engine.

Two mini pinchers and a full-grown Doberman were used for this film. A trainer introduced the dogs to Hart before filming began and coached the actor on how to hold and handle them properly. The cargo set included a mechanism that made the floor tilt back and forth and side to side to simulate the shaking effect. This action required the use of a real dog and a stuffy: when the real dog was in the crate, the motion was slow; when it shakes hard and fast, a stuffy was used instead. Dre's doggie crate was padded and weighted on the bottom, and had cables attached to it to control the movement. It's hard to tell the real dog from the fake once the two scenes were edited together in post production!

Although it looks like the dog hurtling into the plane's engine was computer generated, the production actually filmed the mini pincher against a green screen. The dog wore a wired harness that the trainer slowly pulled along a cable positioned five feet above the floor. A lot of preparation went into this scene to make the dog feel comfortable with the action. The floor was padded for safety, and as the trainer pulled the dog along the cable, a nearby fan blew a gentle breeze that added to the illusion of the dog's doomed flight. Also, one trainer lay underneath the dog touching his feet so that the dog would move them — again creating the appearance of actually flying through the air. In post production, the film was sped up and the plane added in.