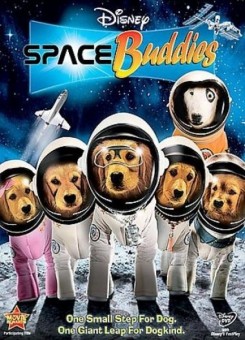 When five mischievous golden retriever puppies accidentally wander onto a space shuttle, which is then sent into orbit, they meet space-traveling pooch Spudnik and head on a journey to the moon. During their adventure, they overcome great obstacles, such as asteroids and zero gravity — and a Russian cosmonaut named Yuri (Diedrich Bader).

Several puppies were alternated in the roles of the Buddies, and the same was true for the adult dogs. The animals were familiar with each other. Either they were from the same litter, or if not, they were filmed separately and added together in post-production using a split-screen technique. Stuffed animal props were used in rehearsals to give the dogs ample rest.

For scenes in which dogs barked or performed mild action such as sitting, lying, jumping (i.e., in or out of chairs), pawing at something (i.e., the controls on the spaceship or a cage door), or walking or running, off-screen trainers used hand signals and verbal commands to achieve the action. Occasionally, for shots in which a puppy places its paws on something or over its eyes, or uses its paws to put on goggles, a trainer held a fake paw on a stick .Trainers used bait sticks, verbal commands and noise techniques (e.g., blowing a harmonica) to get the dogs and puppies to look in certain directions. The couple of times in the film when a puppy seems to slip or fall on the floor was merely clumsy puppy behavior — the floors were not slippery and were checked for good traction and safe footing.

All food was safe for animal consumption. For shots in which a dog carries wrapped space food in its mouth or "chews" food, the food was either a lightweight prop or a treat. Anytime a puppy held something in its mouth, the item was lightweight and nonhazardous, and the dog was accustomed to the action.

The "dirt stains" on Mudbud and the marks under Budderball's eyes were nontoxic, nonirritating makeup or chalk that could not run or get in the dogs' eyes. It was washed off each evening. All costumes worn by the dogs were custom-made for comfort. The spacesuits were not hot or irritating. The cotton suits (with removable hind pieces) were secured with Velcro, and the dogs were well-conditioned to wear them. The moonwalk suits were lined with foam for added comfort. The helmets were lightweight props that were only placed on the dogs for brief scenes and removed between takes. For the moonwalk scene, the lit-up helmet was equipped with LED lights, which were not warm, and the helmet was held up by monofilament line attached to a pole, which was controlled by a crew member. The jetpack was lightweight and only worn for brief takes.

The moonscape was filmed against a green screen on an indoor set consisting of gravel on a cement floor. For the rain scenes, the ground was hosed down before filming to make it appear wet, and a hose dripped water only immediately in front of the camera to make it appear to be raining. All fire and meteor showers were special effects or computer generated, as were the scenes in which the shuttle containing the puppies rolls.

For the scene in which the puppies look out the window, a table and apple boxes were placed in front of the window. The puppies were then placed on the table and cued to walk down the boxes while trainers stood both inside and outside of the house set.

For the scene in which B-Dawg and his owner dance, jump and roll around to music, one trainer placed the puppy on his back on the smooth hardwood floor. A second trainer gently spun the puppy around on his back 180 degrees by pushing his hind end. The first trainer then cued the puppy to jump up. The puppy was then cued to "paw at" the radio, then jump and dance in a circle on its hind legs, which was a trained behavior. The boy actor was not on set during this scene; he was filmed separately and added in post-production.

The dogs were all well-rehearsed to sit in the space chairs, which were custom-made and secured to the ground. For certain scenes, the dogs were secured to the seats with waist ties. For shots in which the space chairs' shoulder restraint bars are lowered over the puppies, the puppies were cued to sit and stay and crew members lifted or lowered the specially designed and padded bars .There was plenty of room between the puppies and the bars, and parts of these scenes were filmed without the dogs (who were added later in post-production). The scene in which the restraint bars are first raised in zero gravity, causing the puppies to "float" up out of their seats, was filmed in separate shots. First the puppies were filmed in their restraints, which were then raised. To simulate zero gravity, each puppy was placed in a special harness hidden under its spacesuit. Rings at four points in the harness were attached to carabiners on a flying rig. The wires of the rig were then attached to a small, hand-operated crane that allowed the puppy to be raised and lowered. Puppies were attached to the rig on the ground and then raised about five feet into the air by crew members. Their ears and paws were also attached to monofilament lines with nonirritating adhesive tape. Once the crew members raised the puppies in the air, other crew members gently maneuvered the monofilament attached to their limbs and ears. To get the puppies' ears and paws to "float," crew members gently lifted them up. Some of the shots of puppies "upside down" were achieved through camera angles and editing (not by actually flipping the puppies around).

For the scene in which the puppies peek out from their hiding places in the kitchen, trainers used bait sticks to get them to look in certain directions. The garbage container that Buddha hid in was actually a prop tube (with no top or bottom) that the dog was cued to enter. The food and garbage was fake and deemed safe. The refrigerator door was rigged to open and trainers cued the puppy to paw at the latch; the puppy was then allowed to eat the treats inside.

For the scene in which the puppies meet Yuri (Diedrich Bader), they were cued to remove his loose-fitting beard. The "ripping" sound effect of the beard tearing away was added in later.

For the shot in which Yuri chases the puppies down the hallway of the spaceship, off-camera trainers cued them to run while crew members used pulleys to close the wooden prop doors behind them when they were a safe distance away. All the doors were rigged with special three-foot wooden blocks installed to prevent them from accidentally closing near the puppies. For the part of this scene in which the puppies push Butterball into the door, using his head as a battering ram, trainers placed one puppy on a small carpeted furniture dolly and cued him to put his head down. The other puppies were cued to lie with their front paws on the dolly (which had its wheels locked so it would not swerve), and then slowly push the dolly toward the doorway. The doorway was completely clear during filming, and the "door" was added in post-production.

At a Mexican bar, dogs sit on barstools and at tables watching the puppies on TV, some of them in clothes and sombreros. Trainers placed the dogs on their marks and cued them to stay, tying them to the higher stools with waist ties as a precaution. The same few Chihuahuas were filmed for each portion of the scene, but thanks to split screen and editing, there appear to be several more than there really were.

Near the end of the film, when the Buddies ride in a convertible during the parade, trainers placed the puppies on their marks on the back of the convertible and secured them to the car with waist ties attached to straps secured to the body of the car. Their seating area was lined with blankets for comfort. The well-rehearsed driver then slowly drove the car a short distance. Costumed trainers walked alongside the car and were scattered in the crowd. The quiet crowd of actors pantomimed the loud noise, and the crew controlled the parade streets (no other vehicles were allowed). For the "pinning" of the medals to the puppies' suits, the lightweight prop medals were attached with magnets. The puppies' suits had magnets sewn inside, causing the medals to "stick" the moment the actor placed them near the suits.

At the end of the film, Spudnick reunites with a boy on a Russian farm. A trainer placed the dog on its mark in a vehicle and then hid inside to cue the dog to "stay" while the driver drove slowly a very short distance. Once the car was completely stopped, the actor opened the door, and an off-screen trainer cued the dog to exit and run to the awaiting child actor nearby, who had hidden treats in his hand to reward the dog with. The snow on the ground was real, which the dog was accustomed to, and the snow blowing in the air was a nontoxic fake prop snow gently blown with fans.

For the ferret action, mainly such mild action as sitting or standing on hind legs on a countertop, control panel or desk, trainers placed the ferret on its mark and either enticed it to stay by placing food around the area, cued it to stay verbally or allowed it to do whatever came naturally and explore the area. The set was secured and crew and trainers stood nearby as a precaution in case the ferret wandered off, which it never did. Trainers hid behind the desk for most scenes. For one scene, a prop microphone was dabbed with baby food to get the ferret to grab it and lick it. Whenever the ferret climbs into the sleeve of Pi's (Bill Fagerbakke) sport coat and ends up in his breast pocket, the actor was equipped with a special jacket with an extra-wide left arm lined with a tube, which traveled up the arm and exited a hole cut in the back of the jacket. A trainer stood behind the actor with a buzzer and small cage, cued the animal with the buzzer to enter the sleeve, continue through the tube, exit through the secret hole and go into the cage. In a separate shot, the trainer then verbally cued the well-trained ferret to stick its head out of the breast pocket using a "head out" command. Whenever Pi holds the ferret in his hands, the animal and the actor were well-rehearsed for this mild action.