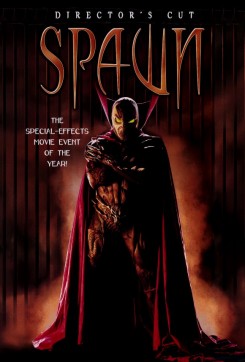 Spawn is a science fiction film based on the popular Image Comics superhero, Spawn aka super agent Al Simmons, and the ultimate battle between good and evil, heaven and hell.

Spaz, a dog, is seen throughout the film. In many scenes, Spaz is merely seen walking A to B, sitting in someone's lap, licking Spawn's face, or being carried by an actor. In one scene, Clown, the evil man from hell, picks up Spaz after he has relieved himself all over Clown's pant leg. Clown is seen supposedly squeezing Spaz with his claws, then drops him on the ground and Spaz runs away. For this scene, the dog was placed on his mark with a plastic tube attached to his leg. When cued with a verbal command from his trainer, he lifted his leg and water was expelled from the tube, onto the actor's leg. The squeezing scene was accomplished by a computer generated technique. There is a scene where Spawn supposedly kicks Spaz. This scene was shot in cuts. A real and fake dog were used. The actor placed his foot under the real dog and slightly lifted his rear off the ground. Then a fake dog is brought in and is used for the shot of the dog flying through the air. When Spawn is seen on the rooftop of the church, Spaz is standing on a ledge, barking. This scene was shot on an inside stage. As a safety precaution, stunt pads were placed beneath the facade church ledge. The trainer placed the dog on the ledge and cued him with verbal and hand commands. Other animal action consists of a few scenes where rats are seen crawling around garbage cans, up steps, and across railings in the alleys. Some pigeons are seen perched in various areas around the outside of a church. The trainers, placed the pigeons in pairs or groups on their mark with food as an enticement. By placing the pigeons in pairs or groups, it distracts them from wanting to fly away. This particular group of birds were conditioned to work around people and noise. In another scene an old box of pizza is seen with maggots crawling all over it. Clown picks up a piece and starts to eat it. This scene was shot in cuts. The maggots are seen on the pizza for the establishing shot and then the camera cuts to the actor.