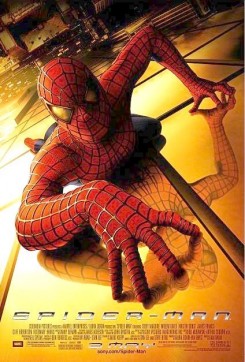 As a tour guide takes students inside a lab, several spiders are seen crawling around in their terrariums. Trainers placed common Jumping Spiders in their terrariums and carefully positioned them in various locations on the set. To prompt the arachnids to crawl, a trainer placed the spider on its mark and blew gently at it through a tiny straw to make it move. In one shot, a spider jumps from one branch to another inside of the terrarium. A trainer placed the branch inside the terrarium and gently set the spider on top of it. Again, using a tiny straw, the trainer gently blew at it, prompting the spider to jump to the other branch.

For Peter's crucial spider-bite scene, trainers selected a brown-colored Steatoda, a nonlethal relative of the Black Widow spider family. After a trainer carefully colored the arachnid with red and blue non-toxic paint, the spider was positioned to drop down from its own spider web onto Maguire's hand. AHA field reps were on set to ensure that all spiders were collected and accounted for after every scene.

At one point, a man falls out of a window and several birds fly past the window afterwards. Later, as Spider-Man saves MJ (Kirsten Dunst) and the populated cable car, birds fly past the chaos. Homing pigeons were used in both of these scenes. One trainer released the birds from off camera, which then flew to another off camera trainer, who directed the birds into a treat-laden crate.

A woman holds a dog as she discusses Spider-Man while a large St. Bernard stands behind her. A trainer placed the dogs on their marks and stood off camera, cueing the canines to look in certain directions. The St. Bernard was also on a leash that was held by a trainer out of camera frame.