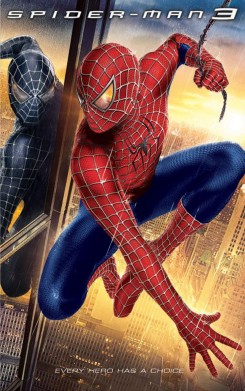 Peter Parker (Maguire) is finally able to balance his relationship with Mary Jane (Dunst) and his superhero duties. Peter's suit suddenly changes color and enhances his powers but also begins to bring out the dark, vengeful side of his personality that he is struggling to control.

Policemen with dogs chase a man who tries to climb over a chain link fence. They release a dog and it jumps up on the man. The man grabs the neck of the dog and twists it, dropping the dog to the ground. The man continues to climb the fence and another dog jumps up and grabs his leg. The man kicks the dog off and escapes over the fence. This scene was filmed in several separate shots and edited together in post-production. Animal trainers doubled as the policemen and the man for this scene. The first dog was released by a trainer and cued by a second trainer doubling as the man on the fence to jump up on him and pretend to attack him. The second trainer pretended to punch the dog. The dog was wearing a harness attached to a cable controlled by an offscreen trainer, who pulled on it to make the dog appear to be hit and drop to the ground. The trainer climbing the fence also wore a harness on a cable so he could be pulled up and away from the second dog who grabbed onto his legs. The second dog was released by a trainer and cued by the climbing trainer to bite at his legs. The trainer pretended to kick the dog and again, the dog was pulled down by the cable onto some mats on the ground. For shots where the dogs are kicked and one dog's neck is twisted, the production made fake dogs and the footage was edited together in post-production.

In one scene, police come across a place where the ground drops off. Some of the officers have search dogs on leashes with them. They stand at the edge of the drop-off and look down. This scene was filmed on a set in front of a blue screen. A platform was built for the actors and animals to stand on and the camera was placed on a crane to give the appearance that everything was much higher than it really was. The trainers doubled as the policemen for the scene. They walked with the animals to the edge of the platform, which was covered with sod.

In the background of a couple of scenes, there are people walking dogs on leashes. The dogs' owners doubled as the actors and the dogs were comfortable with the action. The grounds were checked ahead of time to make sure they were safe to walk on.