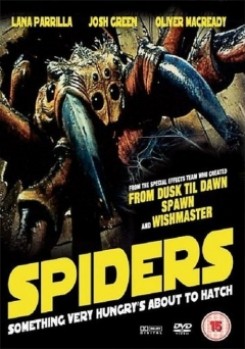 Spiders is a science fiction tale about a government cover-up of an experiment they are working on where scientists inject a tarantula with alien DNA. The giant spider lays an egg inside a human and this causes rapid cell growth. The end result would mean world domination by superior human beings. Fortunately, their experiment doesn't go quite as planned.

Most of the spiders in this film were computer generated. In the beginning of the film, there were a few scenes featuring a real tarantula. There were four different Goliath Tarantula Spiders used for the film. When we first see the tarantula, we see it crawling in a laboratory. The technician picks the spider up and injects it with the DNA, then puts it down inside a terrarium next to another cage that holds mice. The trainer doubled as the lab technician in this scene. The trainer set the cage of mice down on the counter and the spider down on it's mark right before the scene started. The spider crawled around for a bit, the trainer then picked it up and held it in one hand while he used a fake syringe from the prop department to inject the spider. The trainer set the spider down into the terrarium very carefully. We watch the crew go up in the shuttle, knowing the spider is inside with them. After the shuttle crashes, the tarantula is crawling around the wreckage. It crawls up the body of a dead man lying on the floor. The trainer set the spider on it's mark and released it as the cameraman filmed it crawling around the set. The trainer then placed the tarantula on the actor's leg and stood behind it blowing air softly through a straw. The spider quickly moved up the actor's body to get away from the air. As soon as the scene was over the trainer retrieved the spider. In a later scene a man steps on a tarantula and squishes it. A fake spider was used for this scene. The remainder of the spider action was done with computers. Supporting Canine: In a film with so many tarantulas, you might not remember that in the beginning of the film, we see a dog standing next to a bench where a woman is sitting. The trainer once again doubled as the actress and the dog was verbally cued to stay. Questions or Suggestions spiders@ahafilm.org