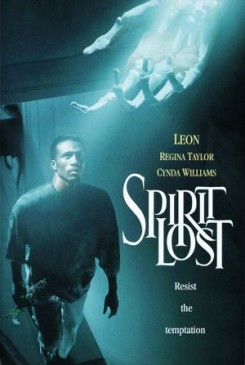 Spirit Lost is a film about, Willy and John, a young married couple, and the spiritual being living in their new home that almost destroys their lives. Willy sold her successful business and John quit his job. Along with Spider, their cat, the couple moved from the mainland to Catchachook Island so John could pursue his first love, painting. Hoping the view would inspire John to paint, the couple purchased a lovely old sea captain's home by the ocean. What they did not realize is that the house also came with its own ghost. John was the first to see Arabella, their ghost. After Arabella made her presence known to John, she slowly started to take away his energy and make him love her. At first he was intrigued, but it soon became an obsession, an obsession that ends up costing the couple the life of their unborn child, their cat, and almost their marriage.

After Willy looses her baby, she returns to the house determined to get rid of Arabella. In retaliation, Arabella kills Spider and Willy finds him on her bed, with his throat slit. For this scene, a previously euthanized cat had been obtained from the SPCA of Anne Arundel County. Fake blood was applied to the animals neck. In the beginning scene, Spider walks through the bathroom filled with steam. Then later he is seen in his pet carrier in the couples van. He is also seen walking through the yard of their new home and on one occasion he finds a locket in the weeds. Willy is seen several times carrying the cat throughout the house. On several occasions the cat is seen lying on Willy's bed with the actor stroking his coat. There is one scene when Spider is on Willy's bed and the cat senses Arabella's presence in the doorway and hisses in that direction. Then later in another scene the cat is seen standing on her hind legs meowing outside the door of Willy's bedroom. For the scenes of the cat going from A to B or sitting on the bed, the trainer merely placed the cat on her mark and used verbal commands with food as a reward. When the cat is seen hissing, she was merely hissing at a dog which was just out of camera range. When the cat is seen standing with her front paws outside Willy's bedroom door, the trainer had attached some food to a piece of monofilament and dangled it just out of the cats reach. She was trying to retrieve the food and was meowing as she stretched up the door. Other animal action consists of some seagulls seen flying over the ocean as the couple is driving along the coast.