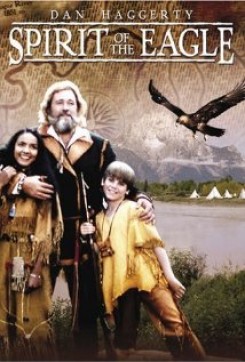 Spirit of the Eagle

An adventuriuous tale of a man, Eli, and his young son, little Eli, as they make a life for themselves in the wilderness. Eli, a mapmaker, has built a cabin for himself and his son after the death of his wife a year before. During the year he was able to make friends with the Indians as he brought up a young Eaglelett that had become orphaned. He named the Eagle Lady. They were as one with each other. They went through many hardships with the constant help of Lady. Along their way they met the daughter of the Indian chief who showed Eli the ways of the Eagle. She fell in love with Eli and followed him and the boy through some of their adventures until Eli finally realizes that he, too, is in love with her and the three become inseparable.

The animal action is continuous throughout the entire movie. There is one scene in which a trapper shoots at Lady hitting her in the wing and she plummets to the ground. This scene was shot in cuts using a trained Eagle that had been injured in the wild, (it now lives at Wildlife Images Rehabilitation and Education center), and a fake eagle that was dropped from a helicopter to portray the eagle falling to the ground. The real eagle (trained by the use of a whistle, voice commands and food rewards) is never harmed. Stage blood was applied to the bird for close-ups in all of the necessary scenes. The traveling horses used in the movie were trained riding horses belonging to John and Bo Derek and were never in any danger. Another horse scene involving the Indians breaking in some wild horses was done with trained rearing horses. In another scene Eli and his son are seen traveling down river with two traders on a supply raft, with a crate carrying two chickens, and a pig. The animals used in this scene were livestock owned by a local farmer and were not injured. Other mild action shows Little Eli petting an owl and feeding a raccoon. Both of these animals were pets belonging to one of the local residents. All other scenes using animals were background only.