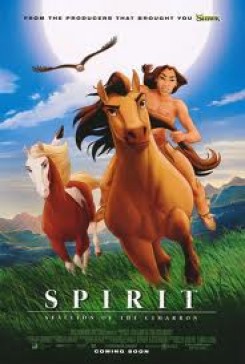 Spirit: Stallion of the Cimarron

Spirit: Stallion of the Cimarron, DreamWorks's new animated feature, is the story of a wild mustang named Spirit who resists the "two-legged's" attempts to enlist the freedom-loving animal into a beast of burden. A groundbreaking achievement, it is the first film of its kind to combine both traditional 2-D animation and 3-D computer animation, creating a new style of filmmaking that Producer Jeffrey Katzenberg calls "tradigital." It also has the distinction of being the first film to be told from the point of view of a horse, a notoriously difficult animal to animate.

In order to realistically capture the grace and fluidity of these magnificent animals, DreamWorks sent their team of over 300 animators and artists back to school to learn all about horses. Enter self-described "animator-whisperer" Dr. Stuart Sumida, a trained paleontologist and Professor of Comparative Anatomy at Cal State San Bernadino. Beginning early in the morning, Dr. Sumida taught the spirited group about horses from the inside out, often bringing in skeletons and skulls for the class to examine. After a half-day's lecture, the group would head out to the pasture—often at the Los Angeles Equestrian Center, which is close to the DreamWorks campus—to study live horses. There, the group would touch the animals to study how their muscles moved and interact with them to get a "feel" for their dispositions and expressions. Along with Dr. Sumida was Dr. Deb Bennett, an animal consultant who led the team to her private ranch to work with her own horses as well.

In addition to their coursework, the animators and artists also had a muse—the living, breathing inspiration for hero horse, Spirit, a Kiger Mustang that DreamWorks found and purchased to match their initial designs of Spirit. According to Supervising Animator, James Baxter, the DreamWorks team observed the horse rather than interacted with him, making subtle adjustments to their drawings to more closely emulate the beautiful animal. Admitting to a few artistic liberties, however, Baxter acknowledges that the animated horses differ from the live horses mostly in their faces. Since real horses' eyes are actually on either side of their head, the artists drew the horses with their eyes closer together in order to convey more human-like emotions. Yet despite their slight physical disparities, the real Spirit and his animated counterpart were more alike than ever imagined.

Kiger Mustangs, A Link to the Past

In Spirit's journey from a free-roaming existence to one of servitude and back again, one element remains constant—the horse's indomitable will to be free. In fact, Kiger Mustangs, as a breed, have long resisted being beasts of burden, with many of them still living wild and free. Federally protected as wild horses by the Bureau of Land Management (BLM) since 1971, the Kiger heritage is a relatively new discovery; they were not recognized as a distinct breed until 1977 by BLM Wild Horse Specialist E. Ron Harding. Originally, two Herd Management Areas (HMA), designated by the BLM, were selected to prevent losing this unique breed to natural disaster. Both areas were located in southeastern Oregon, where they were initially identified.

The Kiger lineage traces back to the early 16th century Spanish Conquistadors, and they are one of the few breeds of horses whose genetic make-up can prove that ancestral connection. The approximately 700 Kigers that exist today descend from the legendary Kiger, Mesteño, the lead stallion for the Spanish herd. In general, the breed is physically smaller than most horses, and many have primitive dun markings that include zebra stripes on their legs or a dorsal stripe, which the real Spirit has.

Kiger Mustangs embody the renegade spirit of the Old West, and keep that spirit alive by remaining in the wild. The BLM protects the horses by controlling their population so they do not starve in the wild, adopting out a certain number of horses to sanctuaries and private owners. The real Spirit currently resides at the horse sanctuary Return to Freedom in California, where he is able to run free and yet still be provided and cared for. AHA recently visited Spirit at his new home and can attest that he is living a healthy and happy life.