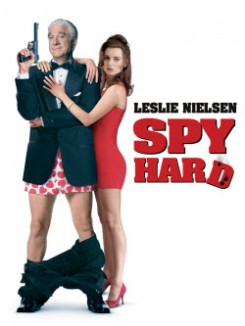 Spy Hard is a comedy spoof on Bond, True Lies, and Die Hard movies of the past. The principle character is Dick Steele, Agent WD40, a covert agent for the U.S. After losing his partner and lover, Victoria Dahl, on their last mission, Steele retires from the spy business. However, fifteen years later, he is called back to duty when Victoria's daughter, Barbara Dahl, is captured by General Rancor. Rancor is the man that Steele thought he destroyed on that fateful mission when he lost Victoria. Steele now feels compelled to rescue Barbara's daughter from the clutches of that evil predator. While searching for General Rancor, Steele meets a young woman, Agent 3.14, and shortly thereafter she is captured by Rancor. Rancor wants a micro chip that her father, professor Ukrinsky, has developed. It can be used for world peace or world disaster depending on whose hands it falls into. Rancor knows that Steele will lead him to Agent 3.14's father because part of Steele's mission is to find the chip and keep it from falling into Rancor's possession. While Steele is rescuing Agent 3.14 Rancor's men discover where Steele is hiding the professor and they kidnap him. When Steele and Agent 3.14 arrive to pick up Ukrinsky, they discover him missing. Now the real action starts as Steele with the help of Agent 3.14 go to Rancor's headquarters and attempt to rescue the world from the evil clutches of a mad man.

There is a scene where Steele is being pursued by Rancor's men through the park. He fails to notice a policeman and his horse beside a park bench. As the policeman is bending over to tie his shoe Steele jumps onto the bench and onto the back of the policeman. When the policeman stands up-right he shoots Steele into the air and he lands on the back of the horse. The horse rears and takes off at a gallop through the gardens of the park with Steele still aboard. Slice, one of Rancor's men, steals a lawnmower from a gardener and pursues Steele. Horse and rider then cross the street and proceed into the lobby of a hotel where the horse jumps over a wooden flower bed and heads for the elevator. The horse stops in front of the elevator. When the elevator door opens, another guest exits on a horse before Steele and his horse enter. A couple is on the elevator and to the disgust of everyone on board, the horse decides to relieve himself. This scene was shot in several cuts. A trained rearing horse was used for the scene in the park when Steele is shot from the policeman's back onto the horse. When Steele catapults over the policeman and onto the horse, the actor is actually hooked up to a wire attached to a crane and is pulled up in the air where he somersaults and is placed on the horse's back. The trainer is standing off camera in front of the horse to keep him on his mark. Prior to the stunt of jumping over the flower bed, the rider had allowed the horse to familiarize himself with the wooden flower bed which was 3ft high and 1 1/2 ft. wide. When Slice is chasing Steele and the horse through the park, the lawnmower scenes were actually filmed in separate cuts with no horse present. Steele and the horse are seen exiting the elevator onto the roof. Slice, still on the lawnmower, exits the adjacent elevator and begins chasing Steele across the roof-top. The horse runs towards the other side of the building where Steele pulls on the reins to stop the animal, but the horse encounters a brick wall which crumbles and horse and rider fall over the side. The horse lands in a swimming pool on the roof top of the adjacent building below. This scene was shot in several cuts. When the horse and rider exit the elevator, the real horse was used. Barium had been applied to the shoes of the horse to prevent him from slipping. When the horse is seen running through the wall and falling into the pool, an animatronic horse was used. When Steele and Agent 3.14 arrive at Rancor's headquarters, a remote island, a large snake is seen sitting on a tree branch. Steele is then seen having a fight with Slice and when he reaches behind him to grab a tree branch for defense he actually grabs the snake. Steele proceeds to swing it at Slice's head and the snake coils himself around the man's neck. While he is still holding onto the tail of the snake, Steele pulls Slice off of his feet and he falls into a pit. The snake uncoils and Steele drops the snake to the ground. A real and a fake snake was used for this scene. The wrangler placed a real snake on the branch and retrieved it at completion of the establishing shot. A mechanical snake was used for the rest of the scene. Other animal action consists of a scene at a convent where Steele sees a penguin under a nun's skirt. A trainer in costume, playing the part of the nun, placed the penguin under her skirt and then lifts the skirt at the appropriate moment. After being captured and taken to Rancor, Steele is being disarmed and a cat is seen supposedly falling out of his clothing and landing on the floor. The cat screeches and runs off. The trainer who was just off camera, dropped the cat from just a few feet and then used verbal and hand signals to cue him to run off. The sounds of the cat screeching was later added in post-production.