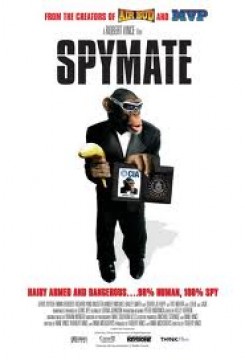 Former spy Mike Muggins (Chris Potter) and his chimp partner, Minkey, find themselves back in business when Mike's ultra-brainy daughter, Amelia (Emma Roberts), gets kidnapped by the unscrupulous scientist Dr. Farley (Richard Kind). Mike and Minkey undertake their most important mission ever when they travel from Jamaica to Japan to rescue Amelia before it's too late.

Three chimpanzees—Louie, Jack Jr. and Conner—were used interchangeably to portray the hero role of Minkey in this film. In the opening sequence, Minkey infiltrates a camp in the Arabian Desert to save his captured partner, Mike. The chimp must first battle menacing guards before the two manage to escape on an awaiting ATV, and later, on an ultralight, while guards on horseback pursue them. Fight choreography throughout this movie was filmed in short pieces and required extensive training and rehearsals based on play behavior. Costumed trainers replaced the actors in shots that called for direct physical contact, and handlers verbally directed the chimp to hit and kick on cue. All prop weaponry and gadgets were dulled or made of rubber and posed no risk to the animal, and stunt pads below frame cushioned the chimp's cued tumbles when needed.

The ATV was mounted on the back of a flatbed truck moving at approximately 5 mph; the clever camera placement created the illusion of the ATV driving through the dunes. After several rehearsals, five mounted stunt riders, two pick-up riders, and one additional wrangler on foot were added to the mix, while a trainer sat in front of the camera and pointed to get Louie to look back at the cantering horses.

When the real chimp was filmed on the ultralight, this small aircraft was mounted on a stake bed truck and two unseen trainers accompanied him. For other flight footage and the explosion on green screen, a stuffed chimp doll was used.

Minkey straps on his mail-order jet suit in one scene and, with the push of a button, the chimp shoots up high in the sky, doing dips, turns and flying like Superman past a British Airways jet. This sequence was filmed with Louie lying on a breast plate made to look like a space suit that was attached to a support harness. Two trainers in green suits stood beside Louie while a green screen showed scenes of the chimp flying away from his trailer and over the cityscape. The body support harness was padded with soft foam, and flames from the jetpack were computer-generated imagery (CGI).

Later, after the ringleader has nervously called for Minkey several times, the chimp cuts short his inaugural flight and enters the big top to boisterous applause. Minkey performs a routine with an acrobat nicknamed "Fly," but when his partner's trapeze suddenly breaks, Minkey uses his jetpack to zoom down and rescue Fly before he hits the ground. Fly's salvation was actually shot in reverse; instead of Louie flying in and catching the stuntman, they started together and Louie was pulled back on his harness while the stuntman was pulled up. One trainer with Louie wore a green suit so he could support and guide the chimp during filming but be digitally removed later. The audience of extras pantomimed their claps and cheers so as to avoid exciting Louie.

In one scene, Minkey jumps on his convertible skateboard and lures Dr. Farley's thug Hugo (Michael Bailey Smith) to chase him around Tokyo. Minkey does a skateboard trick on a handrail in the park and expertly navigates a snake course while Hugo trails behind on a motorbike. Production controlled street traffic on location, and as a precaution, trainers positioned themselves between the chimp and any extras appearing in the scene. Minkey's rail trick involved a skateboard on a small platform rigged with a pulley system that controlled the speed on descent; the chimp simply stood on the board and trainers let it slide. Two mattress pads were laid out to cushion the landing area if needed.

Louie was extremely well-prepped for and loved these skateboarding stunts, having done similar work in the film MVP 2: Most Vertical Primate. This sequence was shot in many takes, and Louie followed verbal cues from off-screen trainers to negotiate the banks and turns of the skate park. For some shots, Louie and his skateboard were pushed by a trainer at the starting mark and received by another handler at the end.

The skateboard had a slot to stabilize Louie's foot and to help him turn. The footage in this sequence was sped up to make it look like Louie was skateboarding much faster than he really was.

When Minkey catches a tow on a taxi's fender as he skateboards back to the hotel, Louie was actually grabbing the end of a strap held by a trainer hidden in the trunk. The car had no engine, and a stunt driver steered the vehicle for the slight downhill roll of approximately 20 feet.

As Dr. Farley whisks Amelia away in a helicopter, Minkey jumps up and grabs one of the chopper's landing skids. The aircraft leaves the rooftop helipad with Minkey dangling over the city below. This scene was shot with Connor the chimp against a green screen and with blowing fans to simulate the windy outdoors. In reality, Connor's feet were a mere eight inches from the ground, and the helicopter gently shifted a couple of degrees for the illusion of movement. For the final takes, the green screen depicted snow and trees instead of a city scene. When the chopper supposedly nears the mountain station, Minkey lets go and freefalls down to the snowy ground below. For this shot, Connor jumped about five feet onto a thick stunt pad covered with green cloth that later became the snow-covered terrain.

Once Mike and Minkey infiltrate the Mountain Base Camp, the duo breaks through a vent in the inner lab and lands on two security guards below. In this shot, the chimp wore a heavy monofilament line attached to a trainer wearing a ninja outfit. Two other handlers above gently lowered Louie onto the costumed trainer, though the film speed makes it look like he does a freefall from the ceiling.

As the fighting continues, Minkey swings from a wire cord and kicks over a ninja. The chimp then flips one bad guy over his head when the man charges at him. As previously explained, this one-on-one contact occurred between Louie and his trainer, who used verbal cues and physically positioned Louie's hands where required. Louie swung on a rope and kicked the trainer in the chest, causing him to fall back onto crash pads. For the toss-over shot, Louie grabbed the trainer's wrists and the trainer flipped himself over the chimp, landing on his back. Louie simply sat or lay down and puts his feet on the trainer's abdomen. Several handlers were nearby at all times during this scene.

During their getaway, Minkey snowboards behind Mike and Dr. Amour (Musetta Vander) wearing a backpack and shooting a laser gun at Hugo. To get the right look for this scene, Louie sat on a special stool that made it seem like he's standing upright. Using a six-foot pole extended behind Louie, a trainer suspended the laser gun with a line of monofilament to keep it level and verbally cued the swinging action. This was filmed against a green screen. When filming took place at an outdoor location, trainers kept the chimps wrapped in blankets and in a heated tent with a plastic floor and walls when not on camera.

Just as they're about to fly over the edge of a cliff, Minkey jumps on Amelia's back, opens a parachute, and they glide to safety behind Mike and Dr. Amour. Jack the chimp sat on a platform covered in green fabric behind Amelia to give the appearance of piggybacking while snowboarding. The trainer placed Jack on Amelia's back for the visual effects shot so it looked like Jack jumped by himself. The handler then cued Jack to smile and pull a cord out in front of him that had an aluminum clamp attached, which the visual effects department turned into a parachute opening behind them in the final cut.