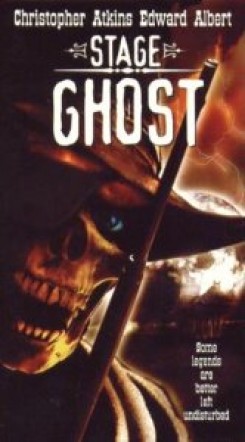 In this modern western, a sheriff brings a bank robber to Adobe Station to catch a stagecoach into town. The next coach arrives with no driver or passengers, only some blood and a note that says, "Give it back." The mysterious note prompts the two to board the coach and attempt to make it to the next town. Yet they soon discover that someone is following them, and the sheriff has to find out what the strangers want back.

In the beginning of the film, we see a stagecoach led by a team of four horses pull up to Adobe Station. It doesn't have a driver or any passengers. The sheriff and several onlookers go out to investigate. For this scene, two trainers hitched the horses up and hid inside the coach. The other two trainers were on horseback waiting off-camera to retrieve the team of horses after the shot.

One horse from the team of four rears up and appears to be shot. We see it fall down, then lying on the ground with blood on its head. To ensure the horse's safety, the trainer prepared the ground by digging up moist, fresh dirt and then putting down fresh peat moss, sand, and top soil to cushion the horse's fall. A break-away harness was used so the horse could separate from the team quickly. The trainer used hand signals to cue the horse to rear up and fall down into the fresh dirt. A stuffed horse with fake blood was used in the final shot of this scene, where the horse appeared to be dead.

Outside Adobe Station, men on horseback shoot at each other. An Indian and his horse rears up as they both get caught in the gunfire. Stunt men, along with two of the horse wranglers - who doubled as actors - mounted their horses and took their marks. The scene was rehearsed several times, so the men knew where to ride as they shot their prop guns. The sound of the gunfire is added in later. A trainer stood off camera and used hand signals to get the Indian's horse to rear up.

Later, the horse-drawn coach comes around a bend in the road as boulders begin to fall in their path. The rocks that tumbled down were actually made of foam rubber. An off camera stage-hand threw dust over the rocks to enhance their realism. The trainer doubled as an actor and drove the team of horses about twenty-five feet as the lightweight rocks tumbled down.

There is a scene where some men come to the station on horseback at night, dressed as skeletons. They are shot off their horses. The stunt men mounted the horses and they rode about twenty feet while the trainers waited off camera. The men wore blood squibs and they set them off so it looked as though they were shot. Then they fell backwards, off their horses. The horses didn't seem to mind at all, perhaps because the gunfire was a sound effect added in post production. The trainers, who were just off camera on horseback, retrieved the horses afterwards.