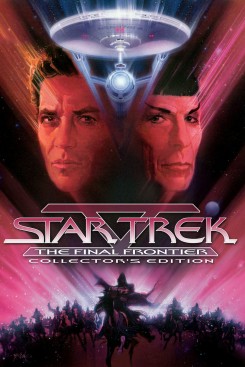 The crew of The Enterprise are on a camping trip in Yosemite enjoying horseback riding and amusing exchanges around the campfire when their shore leave is cut short. The Enterprise is ordered to rescue the hostages that were taken when an enemy force invaded the peaceful planet, Nimbus 3. To reach the hostages Spock and Captain Kirk travel through the Nimbus 3 desert and invade Paradise City on horseback. Once there they learn that it was all a sham devised by Spock's crazed half-brother, Sybok, so that he could kidnap The Enterprise and its crew. Sybok has an obsessive desire to fly to a planet at the center of the galaxy where no one has ever been before, where he hopes to find the "Meaning of Life". To reach this destination they must enter the Great Barrier which is like falling off the edge of the Earth, but Sybok will stop at nothing in his obsessive quest for the "Meaning of Life".

A stunt that appears to be done by one horse was actually done by three and the film was edited to create the desired illusion. The first horse's saddle was heavily padded to cushion the effect of a rider jumping onto it. The second horse rears and when Spock places his hand on a horse's neck (the Famous Vulcan Nerve Pinch), a third horse lies down and stays still giving the appearance of being magically stunned.