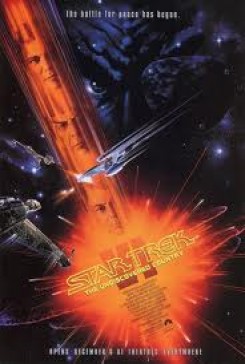 Amid spectacular special effects, the Starship Enterprise makes its final voyage under the command of Captain Kirk, who is about to retire. As the result of a devastating explosion, the Klingon Empire has but fifty years of life remaining. This is just fine with Captain Kirk, who views the Klingons as an aggressive and untrustworthy people. Because the Klingons were responsible for the death of his son, Kirk would simply let them die. However, the Klingon ruler has requested a conference on universal peace and Captain Kirk has been assigned duty to greet the Klingon emissary. Kirk is angry and doesn't trust the Klingons, but Mr. Spock feels it is a great opportunity for peace and an honor for Kirk. Kirk relents and hosts a dinner party for the Klingons aboard the Enterprise. The party goes awry and the Klingons return to their spaceship. Shortly afterwards, the Klingons' ship is fired upon and their leader is killed. When irrefutable evidence shows that the fatal missiles came from the Enterprise, Kirk stands trial, is found guilty and sentenced to life imprisonment, working in the mines of an alien planet from which there is no escape. Mr. Spock, feeling responsible for Kirk's fate, vows to find the real assassin and free Kirk from the penal colony.

The only animal action in the film involves a Klingon guard dog in scenes at the penal colony and aboard the spaceship. In order to make the dog appear to be "other worldly", he was fitted with a body costume and head gear. An American Humane Representative was present for costume fittings in order to assure that the materials were light weight, fit comfortably and were properly ventilated. The dog was gradually acclimated to the costume over a period of more than twenty sessions. During filming, AHA Reps were on the set to assure that the dog would not spend more than thirty-five minutes in costume without the head piece, and no more than twenty minutes in full costume. A fake puppet head was used for some close-ups. All the dog action was basic A to B or barking or growling.