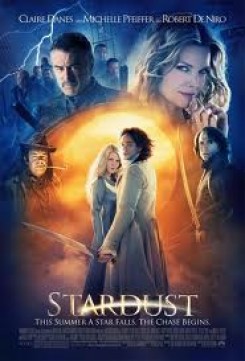 To win the heart of his true love, Tristan (Charlie Cox) promises to travel to a forbidden magical land to bring her back a fallen star.

Several scenes in the movie show various animals in cages at the witch's lair. Trainers transferred the animals from their transportation crates to their prop cages, which were comfortable, locked and secure. Dividers were used between cages to prevent animals in neighboring cages from making visual contact with each other. Only necessary cast and crew members were allowed on set while the animals were working. Fans were positioned off-screen to help keep the animals cool while working under stage lighting. For certain scenes, trainers used a combination of stuffed toys, noisemakers and verbal cues to make the animals appear frightened.

An alligator and a ferret are pulled from their cages, placed on a table and cut open. After being well-prepared in the proper handling of the animals, the actress gently removed the alligator from its cage by its tail and set it onto the floor. The actress then carried a prop alligator to the table for the on-screen sacrifice. The ferret was lifted out of its cage by the actress and carried toward the table to an awaiting trainer. The ferret was then replaced with a prop ferret for the actress to "sacrifice." The actress was familiar with ferrets and comfortable with handling them.

In one scene, the animals, including ferrets and wolves, are released from cages, attack the witch and run out of the castle. This was achieved using a combination of live action and special effects. When the wolves were released, a security fence was stationed around the other animals and crew members were not allowed on set. The trainer doubled as the actress. Pieces of food were sewn into the trainer's dress and shown to the wolves prior to filming. Off-camera trainers then released the wolves from their cages, and the costumed trainer called the animals to come to her. The wolves were allowed to tear the food from the dress as a treat. Nonslip flooring was installed to provide the animals with ample traction. As for the ferrets, treats and noisemakers were used to excite them. A hydraulic system was used to open the cage doors. The ferrets were called to the trainers located just outside the camera frame. Stuffed ferrets were also tossed into the scene and attached to the actress' dress. Once the animal action was completed, the trainers put the animals back into their cages. The wolf and ferret footage was shot separately and edited together in post-production.

A man walks a dog through the village. The actor was handed the leash right before filming began and the dog was retrieved by the trainer at the end of each take.

A bird is turned into a princess and then back into a bird while sitting on a gypsy's cart. This scene was filmed in separate shots and only required the trainer to remove and replace the bird as needed for the shot. At times throughout the movie, the bird stays tethered to the cart, fluttering from its perch. A prop skull doubled as the bird perch and was secured to the cart. The bird was tethered to the perch and removed by the trainer after each take. A plastic dish of food and verbal cues were used to encourage the bird to flutter as needed.

A goat is on a leash in the village. Lamia (Michelle Pfeiffer) turns a man into a second goat and hooks the two goats to a cart that pulls her in several scenes throughout the movie. In one scene, Lamia cracks a whip at the goats to get them to move. The goats were placed on their marks by trainers and given the verbal cue to "stay." The actress held up the whip and made a "ha" sound to simulate cracking the whip at the animals. This sound cued the goats to walk toward the off-screen trainer. The goats apparently enjoyed pulling the lightweight cart so much that a brake was installed on the cart, allowing the actress to gently slow the animals down as necessary. This action was filmed indoors against a blue screen. The animals were kept cool with a fan while filming and were rewarded with treats at the completion of the scene.

Horses are seen throughout the film, running, being ridden, pulling carriages or wagons on pathways and traveling through the woods. In one scene, horses pull a carriage in the rain, and in another scene, horses pull the carriage with no driver. Stunt riders in costume were used in all horse-riding scenes. In scenes in which carriages and wagons are pulled by horses, including the "invisible driver" scene, a trainer rode inside the wagon and steered the horses. Brakes were also installed inside the wagons to control speed. During a montage sequence as a caravan of carriages and wagons travel through a town, one carriage is shown going down a steep hill. This carriage was a prop made of lightweight material. One end of a metal cable was attached to the carriage and the other end to a truck as a safety precaution in case the brakes failed. A stunt driver replaced the actor for this scene and another person hid inside the carriage to work the brake and control the speed of the carriage. Trainers remained nearby for all scenes. Takes were limited whenever horses were required to gallop. The horses were only required to travel a short distance for all high-energy scenes and were rested and watered between takes. All areas were inspected by the American Humane Animal Safety Representative and cleared of debris prior to rehearsals and filming. For a scene in which horses and a unicorn are at an inn on a rainy night, the rainstorm was created with a rain machine on a back lot and the lightning was simulated. Rubber horseshoes were used whenever the horses were required to walk on cobblestone or other surfaces that required extra traction.

Throughout the film, Yvaine (Claire Danes) rides a white unicorn through the woods and in the rain. In one scene, the unicorn breaks down a stable door and an inn door, rears up, and then appears to thrust its horn into a man, who turns into a goat, hits the wall and falls dead to the ground. The white horse was turned into a unicorn with the use of a lightweight Styrofoam horn and a Velcro pad. The materials used were nontoxic and comfortable for the horse. The horse wore rubber shoes and anti-slip grip tape, and grip boards were placed on the floor for better traction. One trainer released the horse and a second trainer called it to its end mark. The horse was trained to rear on cue and wore a fishing line halter and lead. The action was filmed against a blue screen.

The prince pulls a man off his horse, then mounts it and rides away. A trainer placed the horse on its mark. Another trainer remained nearby to ensure that the horse stayed in position while the actor and stuntman performed this simple action.

Inside the carriage, a witch turns Tristan into a mouse and puts him in a cage. Yvaine feeds the mouse a piece of cheese through the cage bars. These scenes were filmed in separate shots. Scenes in the carriage were filmed in a mock wagon, which was rocked by crewmembers to appear as if it was traveling down a bumpy road. The mouse was placed on a rock by the trainer and was given cheese treats to encourage it to stay on its mark. A stuffed mouse was scooped up by the actress and then replaced by the trainer with the real mouse seen in the actress' open hands. The trainer placed the mouse in the cage. The mouse was trained to walk from the front of the cage to the back as the actress spoke to it. The actress and the mouse were both comfortable with the actions required. One mouse was replaced by another mouse after two takes to prevent overfeeding. Trainers remained nearby with a "capture cup," and crewmembers remained quiet and still while the mouse was on set.

Small dead animals are seen in several scenes throughout the film, including corpses hanging in the village and a dead goat in a field. Production provided documentation that these animals and furs were fake or props created for the scenes.