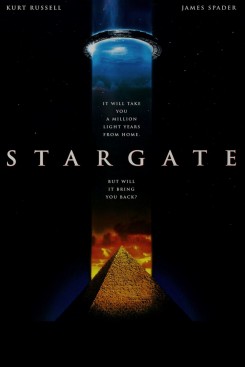 Stargate is an adventure film blending Egyptian mythology and outer space elements. Daniel Jackson, a young archeologist, astrologist and linguistics genius, is asked to translate the hieroglyphics on two ancient Egyptian stone tablets and a twenty foot high metallic ring found at the Great Pyramid of Giza in 1928. Daniel has a theory that the Great Pyramid was not of human origin , but created by an alien civilization. The writings on the tablet and ring prove to be star constellation coordinates that, when matched with each other, provide a "star gate" or navigational device to a planet located on the opposite side of the known universe.

Daniel and a military reconnaissance squad, headed by Colonel O'Neal, use the stargate to travel through a fourth dimension, finding the parallel planet and the key to the mythology. They find the planet to be ruled by the Egyptian Sun God, Ra, who has taken on human form to immortalize his alien species and has enslaved a desert tribe to do his bidding. Unfortunately, Daniel is there on a mission of intellectual and historic curiosity while Colonel O'Neil is under orders to destroy the stargate and the threat to planet earth. When Ra finds out that a nuclear bomb exists, he plans to turn it against planet earth and protect his control over the universe. The mission becomes one of planetary survival, although it is unfortunate that Ra's technology, craftmanship and the splendor of his space craft cannot be integrated into the history of the universe but needs to be destroyed.

When the earth team finally gets through the stargate they discover a desert planet and a pyramidal structure much like those located in Egypt. O'Neal challenges Daniel to immediately find the stargate on this side of the universe and get the team back to earth. However, Daniel needs first to find the parallel tablets needed to do this. As Daniel wanders away from the pyramid where they entered, he discovers a strange beast, a Mastage, which is somewhat prehistoric but a four legged creature with a humped back and long hair similar to a bison. He befriends the creature with the lure of a candy bar and realizes it is domesticated since it wears a saddle-like harness and guide rope. The soldiers see him from the ridge and stupidly fire at the beast scaring it and making it bolt. Daniel's foot gets caught in the guide rope and the mastage drags Daniel thru the sand with the soldiers in hot pursuit. The mastage leads them to a tribe of desert peoples resembling the ancient desert tribes of earth. This begins the unraveling of the puzzle.

For this scene Mastagli Clydsdale horses were costumed to become the fictional Mastage. The head of the mastage was an animatronic device that could be controlled by a human rider hidden under the hump area of the costume when it was necessary for the mastage to react. A pack saddle was used to evenly distribute the weight of the costume in the saddle. The horse also wore rump straps and a collar for added stability. The lower part of the costume consisted of fabric and fake hair attached to leather straps and then to the horse's legs with velcro. The lower leg hair of the Clydesdale was dyed with non toxic coloring to match the upper part of the costume. The skeletal structure of the costume was made of plastic tubing with fabric over it and stood off the horse from one to three feet at the head area. The real horse's head was able to hang naturally and was shielded with loosely draped black netting in front of the face protecting the face from sand. The whole costume weighed approximately one hundred and fifty pounds.

In scenes where the mastage seems to react to Daniel, such as taking the candy and later licking his face after dragging him, a mechanical head was used. This was operated by a stunt person located under the costume head. For certain close up shots when the entire horse's body was not shown, it was not necessary to attach the mechanical head to the horse, but operate it as a separate prop piece. When the head is animated and the body of the horse is seen, a rider under the costume mounted on the horse was radioed when to operate the moving parts. For these scenes the horse was not required to move or run with the weight of the rider. The fully operational mechanical head weighed between two hundred and fifty to three hundred pounds. The horse was very capable of handling up to five hundred pounds of weight on a limited time basis.

When Daniel gets dragged by the mastage, it is actually a stunt man doubling for the actor. The horse was cued to run A to B and the stunt man was dragged behind. Wranglers on pick up horses out of camera range were following as a precaution. This scene was shot in cuts and required that only half the horse's costume be used. Only the legs and hooves are seen in the drag shot and the illusion is that the mastage is running hard over the sand dunes. However, it was easier for the horse to do this since he did not have the entire weight of the costume to carry. A camera was mounted on a dune buggy to follow the movement of the man and the horse. For the long shots of this drag, a dog was costumed similarly to the horse, except that this costume was lighter and enabled the dog to move more quickly than the horse. Hooves made of foam rubber with fabric bottoms and fake hair were attached to the dog's legs with velcro to give the appearance of a horse's legs and hooves. The top part of the costume was foam rubber with hair over it. The costume head was also supported and kept out of the dog's face with a wire muzzle and neoprene cushioning. Two trainers were present, one to release the dog at point A and the second to call the dog to point B and receive it.

In another scene where Daniel wanders off to find the matching tablets, a mastage is seen getting Daniel's scent from his jacket so that O'Neil can track him. For this scene, a stuntman was under the mastage costume and guided via radio to operate the mechanical head. A second wrangler was off camera holding the lead rope of the horse. In later scenes when the tribe allies with the earth team against Ra, there is a massive exodus over the desert dunes. Mastages are seen in long shot for these scenes and are being guided in the lighter costumes by wranglers costumed as tribesmen.

Since the film was shot in desert conditions, it should be noted that several horses and dogs were used in the making of the film so that they could work in rotation and no one animal would be overworked. The animals were allowed to wear the costumes for no longer than three hours at a time and were washed down frequently and rested in the shade. The animals were not allowed to shoot in the heat of mid-day and were only called onto the set for one rehearsal prior to rolling film. Plenty of water and gator aide was supplied for them.