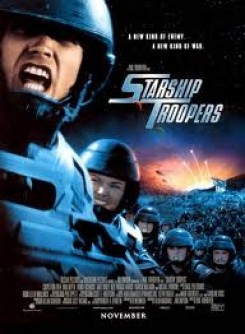 Starship Troopers is a futuristic film about a war against giant bugs that have colonized planets by feeding on humans. It is up to the Starship Troopers to find the leader or ("brain bug"), and destroy it in order to save the earth.

There is a scene where a ferret walks A to B down a table, across the floor and up the stairs. Trainer #1 placed the ferret on his mark and trainer #2 cued him with a buzzer to his next mark. In another scene, some men feed a cow to a captured giant bug. This scene was shot in cuts with a real and a computer generated cow. The real cow was placed on his mark for the establishing shot. Then the still shot of the cow was used with computer generated images for the effect where the bug appears to eat the cow. Other animal action consists of some children seen stomping on some bugs. Fake insects were used for this scene.