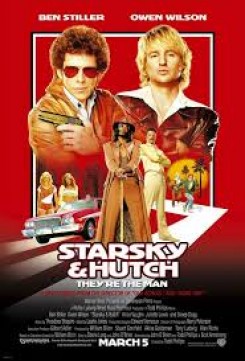 Most of the animal action in this film provides comedic amusement of the slightly off-color variety. A drug sniffing dog goes postal on an unwitting narcotrafficker; an iguana loses its tail amid erratic gunfire; and a pretty pony bites the dust as a result of still more indiscriminant shooting.

In the conference area of a vast office space, Reese Feldman (Vince Vaughn) and his partners present their radically modified cocaine and provide samples for all buyers present. In order to demonstrate the undetectable nature of this revolutionary product, a man leads in Ivan the German shepherd on a leash to suss out which attendee is carrying regular blow. The dog subsequently leaps up and viciously attacks one of the men, knocking him out of his chair and pinning him to the ground as it rips at his sleeve and bites his arm.

The production alternated two German shepherds, Ivan and Panja, to achieve this intense-looking scene, and both animals received extensive preparation prior to filming. The action required several different takes with four trainers directing the animal, including a costumed trainer with protective padding on his left forearm who played the role of "stunt buyer". One trainer cued the dog verbally with a "feet up" command to get the canine to place its front paws on the table next to the petrified men. Then a trainer told the dog to "speak" and it barked in the stunt trainer's face. When the frightened "buyer" got up from his chair and started to walk backwards, the dog jumped up and seemed to pin him to the floor while another trainer told it to "stay". While lying on the ground, the costumed trainer slapped his protected left arm to excite the dog and nearby trainers yelled "take it, take it". The stunt trainer put his arm forward to "catch" the dog, and the two "struggled" as the trainer moved with the dog to get them both into their final positions. Finally, one trainer yelled "Stay! Leave it! Sit! Stay! Good boy" to get the dog to stop playing and sit. As a safety precaution, production filmed this sequence in an enclosed area and removed all non-essential crew from the set.

A spiny-tailed iguana named Iggy portrayed Huggy's beloved reptile, although it seems there was no love lost between the two in real life. The original script called for the actor to hold the iguana in his lap, but scaredy-cat Snoop Dogg would have nothing to do with the lizard and the production decided to simply place "Corky" on a perch, where it remained motionless for the rest of the scene. Meanwhile, a trainer hid under the desk ready to step in when necessary.

When the script called for the iguana to scurry up the bookcase, the trainer applied a light coat of adhesive spray to the area to provide better traction for the animal. After knocking the object off the shelf, the iguana appears to plummet to the floor. In reality, a handler held the iguana about six inches above the ground and camera and gently dropped it onto the floor, which had padding to cushion its fall.

Huggy Bear then stoops to pick up the iguana, which was handed to him by the trainer hidden under the desk. Holding the lizard with one hand and the detached tail with the other, the actor continued his dialogue seemingly unfazed. To achieve this illusion, trainers wrapped a special non-irritating blue tape on the iguana's tail and filmed the scene in front of a blue screen so that the animal's still-attached tail could be erased in post production. In his other hand, Huggy Bear holds the severed tail of a fake rubber iguana.

No Party for the Pony

After infiltrating the party as talentless mimes, Starsky and Hutch (Wilson) ruin the Bat Mitzvah of Reese's daughter when they erroneously assume the shady businessman has stashed a supply of illegal drugs in his garage. When Reese refuses to unlock the door, a swaggering Starsky shoots at the garage door to unlock it, only to reveal not drugs but a beautiful white pony standing inside. This surprise equine gift startles all the guests when it suddenly collapses, apparently shot to death.

The pony used in this scene was prepped to lie down on the garage floor, which had padding covered with a tarp for the animal's comfort. To create the illusion of a falling pony, trainers positioned the horse on its side and directed it to stand up. The post production wizards then reversed the film; this reverse action is an optical effect in which the action appears to take place in an inverted manner from its actual chronological sequence.

During the opening sequence of the film, Starsky bursts through a door and chases a perp from rooftop to rooftop while a pigeon flies nearby. The production used trained and banded homing pigeons released by handlers hidden on the roof; three trainers hand released various birds from different areas of the platform, and no birds were released after 6 p.m. in order to give them enough time to fly home. The ramp that the suspect and Starsky run up and over was actually put in place to facilitate the transport of the pigeon coop, which housed 27 birds.

When the final credits role, a few pigeons fly near Hutch and Starsky as they walk down an alley. These birds were not actors but locals who habitually frequented that particular urban area.

As the crime fighting duo emerged from Starsky's beachside bachelor pad, a private owner walked her dog, Lady, in the background.

The mounted deer head appearing in Reese's living room was actually part of the décor of the home in Pasadena, California, rented by the production.