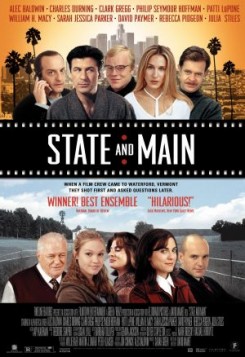 State and Main is a comic look at the filmmaking process. When the production "The Old Mill", scheduled to film in New Hampshire, is run out of town due to the leading man's indiscretion with a teenaged girl, they settle for another location in Vermont. This turn of events proved a blessing and a challenge for the town, production and a colorful group of cast, crew and locals.

Animal action is very mild. In several scenes throughout the movie we see a Dalmatian who is the town's Fire Department mascot. In one scene, during a rainstorm, the dog appears in the bookstore and jumps up onto the loveseat between two seated actors. The dog is led to a bowl and food treats. The dog eats and jumps back up on the furniture. This time it is led outside into the rain. The dog was a female Dalmatian named Dot who was 1 1/2 year old. Dot was given hand and voice cues by her trainer and food rewards. The food rewards were given both on camera by the actress and off camera by the trainer. Why is the DALMATIAN the mascot for Fire Departments worldwide? In the film one of the characters asks this very question. The answer given is that the first organized fire department was on the border of Dalmatian and Sardinia in the year 642. But why the Dalmatian? The character answers that it was either that or a sardine. What is that other animal protection organization mentioned in the End Credits? The organization S.C.R.P. C., Society for Canine Recognition and Protection in the Cinema, is a humorous invention of David Mamet, the writer and director of State and Main. Mr. Mamet also elected "Protecto", the dog as the symbol for S.C.R.P.C. This non-existent group was not on set, however in the credits their "statement"" reads ONLY 2 animals were harmed during the filming of this motion picture." AHA was the official monitoring organization that oversaw the animal action and insured that the Guidelines for the Safe Use of Animals in the Media were followed. Field Representatives confirm that "Protecto" is a lying son of a Bijon Frise and a clever jokester. No animals were actually harmed.