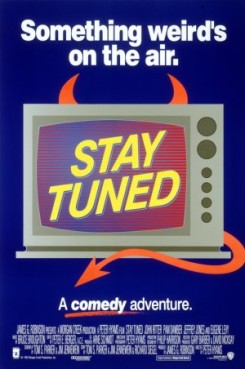 Stay Tuned is a comical farce about a typical all American family, Roy and Helen Knable and their two children, Diana and Daryl. Roy, a real couch potato, is seduced by the Devil's aid and, by allowing him to install a new television set, places his whole family in jeopardy. The new television is actually a doorway into the Devil's own private T.V. world, and by adjusting the satellite dish, the individual will be sucked into this "nightmare theatre". Roy does just that. Once inside, each victim has 24 hours in which to escape all the dastardly situations that the Devil can come up with and find their way out. If they cannot, they must give up their soul to the Devil. Helen, after returning home from work, finds the new television and huge satellite dish. As she stands there in disbelief, the satellite dish sucks her in as well. Daryl comes down the stairs and turns on the new set. As he watches, he sees something familiar. It's his mom and dad, trapped inside a T.V. program! We follow this family through their ridiculous predicaments as, with the kids on the outside, and the parents on the inside, they try to escape the Devil's T.V. Hell Land before the 24 hour destruction time is up.

The next door neighbors have a Rottweiler. As Roy is preparing to leave his home for work, the neighbor is walking his dog. The dog growls and lunges toward the half open window of Roy's car, barking and growling. To achieve this the trainer doubled as the actor and was in the car giving the dog verbal and hand commands to jump and speak. In another scene Daryl sneaks over the neighbor's fence to hook up to their electricity. The dog chases the boy until the boy jumps back over the fence. This scene was shot in cuts. The dog, upon verbal command, ran from a sitting position to her trainer, who was out of camera range. Once over the fence, the boy starts into his house. As he turns around he sees that the dog has propped open one of the slats on the fence and is coming though to continue the chase. This, too, was shot in cuts. The dog's trainer was on the backside of the fence holding the slat up for the dog so that the dog could pass through without getting caught or injured. The dog was then instructed to run to another trainer, who gave the dog the verbal command to "stay". As the dog stands in Daryl's backyard, the satellite dish sucks her up too, making it appear as though the dog dematerializes. This was accomplished by the magic of special effects. This dog is also seen in several other scenes taking a nightly walk with her owner, sleeping on the porch, barking at the neighbors, etc. In one scene, while still in T.V. Land, the couple are sent to the Arctic where they and a man they have met there are chased by a pack of hungry wolves. They run to a shack for shelter but one wolf gets hold of the man's shoe, pulling it off before he can make it inside. The wolves had been trained to play tug with the fur on the man's boot. The trainer doubled for the actor. When the wolves, which are hybrids, chased Roy and Helen, the trainers again doubled as the actors. The wolves were released from one cage and ran approximately 600 to 800 feet to another cage, following their trainers. They were then given food rewards. Once they are inside, Roy accidentally knocks over a propane tank and it ignites. As the shack is burning, the wolves are circling outside. One wolf finds a hole burned through the side of the shack and jumps through to get to the man. The man runs for the door and opens it, only to be pounced upon by a wolf jumping down from the roof, and a wolf from each side. This was shot in several cuts. The wolf that goes into the shack after the man had been called by his trainer, who was out of camera's view. When the wolf jumps off the roof onto the man, again, the trainer doubled for the actor. The wolf jumped from a height of approximately six feet with the trainer breaking his fall. The wolf had been trained to jump on his trainer and had no problem with the scene. The three wolves, again, played tug with the fur of the trainer's clothing, receiving food rewards afterwards. Roy and Helen manage to scoot the burning shack, from inside, to one of the Devil's escape holes, as the wolves continue to circle. Two of the trainers were inside of the shack calling the wolves and raw meat was rubbed on the walls of the shack to make the wolves pursue the moving shack. As the escape hole is too small, Roy chops a larger opening in the hole with an axe so that he and Helen can fit through. Helen jumps through but Roy gets stuck. One of the wolves jumps through a hole in the side of the building, which is in flames, and goes to attack Roy, whose upper body is still visible, sticking out of the hole. Propane fire bars were used around the hole in the shack wall. When the wolf is looking through the burning hole, waiting to lunge on Roy, he was tethered a safe distance from the flames and given the verbal command to "look, stay". When the wolf jumped through the hole, his trainer, who was inside the building, had called him. All safety precautions were taken for this scene. Wet blankets and an animal safe fire extinguisher were on hand. The heat of the fire was so low that a human hand could be passed directly through the flames. The wolf was prepped for this scene and was in no way harmed or stressed. As the wolf approaches Roy, Roy shoos the wolf away with the axe and slips though the hole to safety. This was a fake toy axe, made of soft rubber and the wolf is never actually struck with the "axe". All of these wolves were well prepped to work around fire and thus were not unduly stressed. The wolves' growls and snarls for these scenes were added in post production. Horses are also seen pulling a carriage as background in one scene.