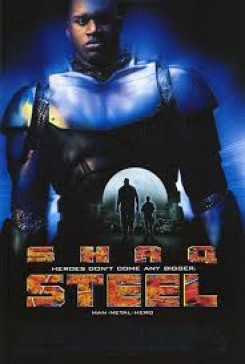 Steel is about John Henry Irons, a crusader for the American way of life, truth and justice for all. When high powered military weapons make it to the streets, John Henry, in a suit of steel, seeks out the villain responsible and vanquishes him and his gang of thugs.

Lillie, a dog, is seen throughout the film. Lillie is seen lying in a dog house, lying on a table at the junkyard, playing in the background, sitting in a truck etc. For all of these scenes the trainer placed the dog on his mark and used verbal and hand commands to cue him. There is a scene where Lillie jumps from the seat of the truck through an open door, attacking a thug. The dog and man are then seen lying on the ground with the dog on top. This scene was shot in cuts. A truck with a wide door frame was used for this shot. The trainer placed the dog on the truck seat and cued him to jump into his arms. In another scene, John Henry tosses a towel into the air and it lands on Lillie's head. This scene was shot in cuts. The trainer placed the dog on his mark and cued him with verbal and hand commands. Other animal action consists of some birds seen flying out from some trees as a military tank passes through a field. A black cat is also seen standing on top of a garbage can in an alley. The trainer placed the cat on his mark. There is also a scene where a two guard dogs are seen on leashes patrolling a security area.