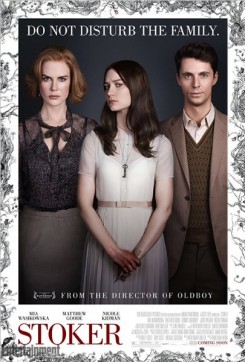 A reclusive teenage girl mourns the death of her father when her mysterious uncle shows up.

Stoker can be described as a dark character study with a hint of Gothic horror. The animal action in the film was implemented to add to the cryptic imagery and overall creepy undertow of the picture.

There were several scenes showing various insects. One such scene shows a spider crawling up the main character's leg and over a dead man's face. The spider was created by CGI and was also used to create the beetle pushing over a pebble and a fly buzzing against the car window.

The most intense (and poignant) scene in the film is when the character of India is hunting with her father and shoots a pheasant in mid-air as it takes flight from the weeds. The actual death of the pheasant was created by CGI, but the American Humane Association was on set to make sure the shot of the pheasant flying in the air was executed safely. In order to make the pheasant fly midway into the air, trainers placed a tether on the legs of the pheasant so he was anchored to the ground. On action, the trainer threw seed in the air. The pheasant jumped up about three feet in the air then easily came back to the ground to finish eating the seed.

The dead birds in the father's office were taxidermy birds, for which production provided documentation.