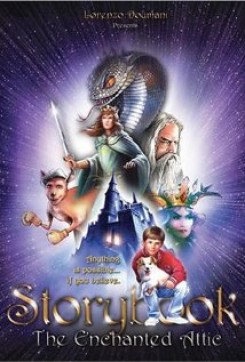 Storybook is a story, aimed at younger audiences, of a young boy, Brandon, and his faith in the fact that anything is possible if you just believe. Brandon and his mother, Kathrine, receive the terrible news that Brandon's father, an Air Force fighter pilot, is missing after being involved in a terrible plane crash. They are informed that it would be impossible for anyone to have survived this severe crash. Devastated, Kathrine and Brandon move from the Air Force base where they had been living back to the house Kathrine was raised in. Their first night in town they stay at Brandon's Uncle Monty's house. Uncle Monty tells Brandon to stay away from the attic in his soon-to-be new home, as it is the entrance to another world. Brandon takes his Uncle at his word, but on the first night in the new house, Leo, Brandon's dog, runs into the attic and disappears. Brandon hears his dog, but can't see him. He stumbles across a book entitled Storybook. He picks up the book and is magically transported into the other world that his Uncle had told him about. This is the beginning of Brandon's exciting adventures as he discovers that he is the chosen one who must free Prince Arthur from the wicked Queen Alvinia's dungeon in order to return to his own world. With the assistance of a very unlikely and diversified group of allies, Woody the Woodsman, Pouch the Kangaroo and Hoot the Owl, Brandon does just that and has a wonderful surprise waiting for him at home when he returns.

Leo is seen throughout the film as Brandon's constant companion. He is seen barking, running, playing, sitting up, sleeping and eating. All of these things were done by the dog following his trainer's verbal commands with food as a reward. In one scene, the Queen has released her three Doberman's to find Brandon and his friends. When the Doberman's do find Brandon's campsite, they growl and snarl at Brandon and Woody. Woody picks up a burning stick out of the campfire and waves it at the dogs, chasing them away. To accomplish this scene, the three dogs followed verbal commands to bark and "smile" from their trainers, who were just out of camera range. The dogs then retreated in response to the trainer's calls. The fire stick was never close to the dogs and was never any threat. Leo chases after the dogs as they leave and, in the dark distance we see the dogs tearing at little Leo, picking him up in their mouths and flinging him around. When Woody finally retrieves Leo, he is covered with blood. Leo was never really present when we see the dogs throwing him around, they are actually playing with one of their favorite stuffed animals given to them by their trainers. When Woody carries the bloodied Leo back into the campsite, stage blood had been applied to the dog's fur to make him appear wounded. There are several scenes involving animatronic animals including a snake, rats, an owl, a kangaroo, and a fish. All of these scenes are self explanatory and obviously animated animatronics.