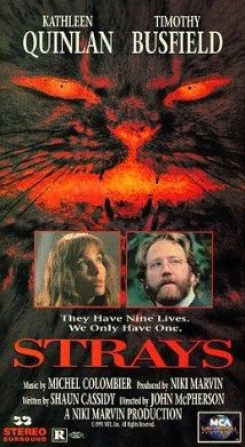 The plot of Strays is based on a totally implausible premise that violates practically every rule of cat behavior. In an opening scene cats mill about an elderly woman who has fed and cared for them and deliberately cause her to fall to her death. They have done this dastardly deed presumable because they are territorial and want the place to themselves. The balance of the film focuses on a sequence of deliberate fiendish attacks by the cats upon any trespassers onto the cats' domain. Shortly after the old lady's demise, a young couple, Lindsey and Paul, buy this isolated country home through Lindsey's sister, Clair, a real estate agent. The couple move in with their three-year-old daughter, Tessa, and their family dog, Benny. When a phone man goes into their basement to repair their phone lines, he is attacked and killed by a pack of feral cats. The couple are unaware that the man is lying dead in their basement, because a tow truck has mistakenly towed away the repairman's car. Benny survives a confrontation with the cats and is taken to the vet's for a few days of rest and recuperation. The family assume Benny has had a run in with a raccoon. While Paul is at work leaving Lindsey and Tessa at home alone, the cats launch their attack in earnest, led by one particularly malevolent male. Lindsey and Tessa are trapped in the house, but Lindsey manages a frantic phone call to Paul on a failing portable phone. Paul arrives to rescue his family and faces a terrible battle with the leader of the pack. The cat loses.