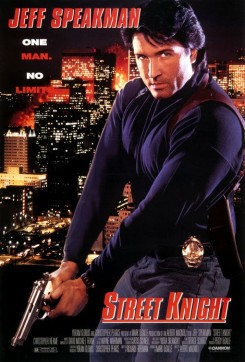 Street Knight is the story of Jake Barett, an ex-LAPD officer, and how he resolves the long-time war between two local street gangs. Jake Barett has lived in the same neighborhood all of his life. He has watched the neighborhood become more and more run-down and seen the growing population of street gangs and violence. Jake used to be a police officer, but after the tragic death of an 8-year-old girl who was killed in a robbery that Jake witnessed, Jake could no longer stomach the job. He now spends his time as a mechanic at a local garage. One day Jake is approached by Rebecca Sanchez, a woman who is desperately searching for her brother, Carlos, who belongs to a street gang called the Lords and has been missing for two days. With a little research, Jake discovers that Carlos could be the only witness to the killing of two gang members from a rival gang, the Blades. After a little more leg work Jake begins to realize that this goes much deeper than just two rival gangs. It is actually a conspiracy of a group of ex-cons, who used to be policemen, trying to start a war between the two gangs, creating chaos in the streets. By doing this they will be able to pull off the biggest diamond heist of the century. Jake decides to don his gun and badge again and sets out to stop this unnecessary war from breaking out.

Animal action entailed one scene in which Jake and Carlos are trying to escape from the ex-cons. They run to the stables where three horses are hitched outside. They jump onto one horse and gallop off, being pursued by the ex-cons in a truck. They gallop through the hills as the truck chases them, until the truck takes a spill and they gallop away. This scene, filmed in Griffith Park, was shot in several cuts. The truck was never close to the horse, or was not present at all while filming the horse. In one other scene goldfish are seen in a fish bowl as atmosphere.