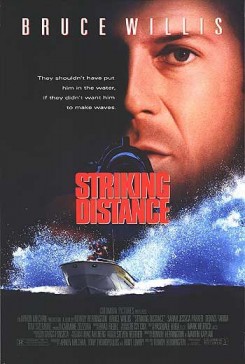 Striking Distance is a suspenseful murder mystery in which Tom Hardy tries to locate his father's killer. Tom and his father, Vince, are both .homicide detectives. They're on their way to the policeman's ball, when tragedy strikes. Vince is shot to death. With a massive cover-up, a man is wrongly accused and convicted of the murder. Tom, knowing in his heart that the wrong man has been sentenced to death, becomes obsessed with finding the true killer, which he believes is another police officer. Tom begins drinking heavily and becomes increasingly hard to work with. He is demoted to Harbor Patrol duty and is assigned a new partner, Jo Christie. Jo is an attractive woman and she and Tom become romantically involved. Little does Tom know that Jo is actually Emily Harper, an undercover agent assigned to evaluate Tom's ability to continue on the force. Suddenly, women out of Tom's past start turning up dead, their bodies dumped in the harbor Tom patrols. Tom believes that the person murdering these women is the same one responsible for killing his father. We wait to see if Tom will be successful in his endeavor to prove just that.

Bob, Tom's cat, is a very friendly fellow. He does simple action like lying on the table, purring, meowing and sitting in Jo's lap. All of this action was accomplished with verbal and hand cues from his trainer with food as a reward.