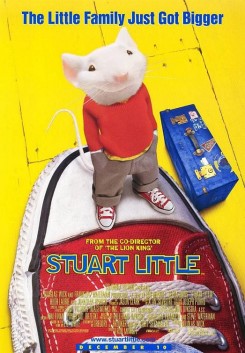 A monkey is seen in a few scenes as one of the bouncers' pets. The monkey sits on the man's shoulder and head, and is seen in a cage for one scene. One of the stripers also has a pet snake which she uses it as part of her routine. The snake is seen around the striper's neck In one scene one of the bouncers is seen putting yogurt in a bowl. He doesn't notice, but there are six cockroaches already in the bowl. He dumps the yogurt in and eats it. These were fake "Gummi-Bear" roaches. Other animal action entailed chickens in one background scene, a dog being walked on a leash and playing ball, one background scene shot at the Miami Seaquairum while the dolphins were performing, and the sound of a squalling cat was added in post production for one other scene.

This film is a combination of live animals, animatronic props, and computer generated images (CGI). Many of the scenes involving the mouse and cats were established using real animals and then completed with the use of the special effects techniques. The trainers used food, voice, and laser pointers to cue the trained cats from point A to B. Stuart Little is taken from the classic story by E.B. White who created the character of Stuart over 50 years ago. This is a delightful tale of an orphaned mouse adopted by a human family. Stuart's adventures as he learns to deal with his new life include everything from a disgruntled and jealous house cat, Snowbell, to winning the trust of his human brother, George. Who can understand "inter-species" adoption? Anyone who has learned compassion for animals and has experienced the human/animal bond, children pet owners, and lovers of fantasy the world over. Creating a Convincing Stuart. An extraordinarily talented group of effects specialists painstakingly toiled for almost two years to bring life to a character that is a mouse who talks with both humans and animals and has a profound effect on his world. Cutting edge technology and digital effects were merged with hundreds of sketches and three-dimensional images. The effects' gurus began by studying real mice. "First you study mice and what they really look like, and then you extract from that kind of caricature which gives personality to the creation," said Director Rob Minkoff. Stuart needed to be a non-human form that read like a human form. Animation supervisor, Henry Anderson, is a pioneering digital animator who, along with his team, created a library of emotion and motion for Stuart. Anderson studied the movements of mime artist, Bill Irwin, and interpreted them into Stuart's performance. Enhancement came in the form of millions of computer generated hairs for Stuart's head and digitally tailored clothing created by animators who actually took sewing and tailoring classes to learn how to construct fabric for the most realistic effects possible. Keeping Their Eye on the Ball: The lighting for Stuart was also a study in ingenuity. Visual effects supervisor, John Dykstra, went to great lengths to study the lighting techniques used for the human actors. "We photographed a silver ball that had a reflection of the set in it. We used the reflection to accurately position the lights fir the mouse, right down to the reflections in his eyes. What About the CATS?! Animal coordinator, Boone Narr of Animals for Hollywood, made tremendous strides in the training of 23 cats of various breeds that acted out the intricate behaviors of the feline characters. The Little's pet cat, Snowbell, was actually played by five identical white Chincilla Persian cats who were all trained to specific tasks. Eight additional trainers were also on set to direct the cats through their performances. One particularly difficult behavior is when Snowbell's friend Monty literally rolls around in hysterics. This was not an easy trick, but Monty was trained to do it while on a counter simultaneously rolling over a box of treats. Trainers worked in pre-production with a group of cats all trained to roll around in laughter. The group giggle-fest never made it to the final edit. When the cats are seen in the park climbing trees while chasing Stuart, trainers were on harnesses in the surrounding branches for safety. This chase sequence was filmed in cuts. No real cats actually took any falls from the trees into the lake below, but swimming cats that were conditioned to and actually like water, got to swim to shore. For more stories on animals and their celebrity humans and other movie news go to "Reel Pets" at www.animalfair.com or see Animal Fair Magazine.