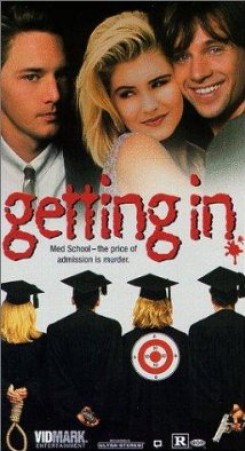 Getting In is a comedic murder story about an undergraduate student, Gabriel Higgs, who is under great pressure to gain entrance to Johns Hopkins Medical School. Four generations of Higgs went to this prestigious school and it is imperative that he get accepted. Unfortunately, Gabriel is only able to achieve sixth place on the waiting list for acceptance and cannot bring himself to tell his overbearing father and mother this truth. Instead, he plans to bribe all five of the candidates ahead of him on the list so he can attain the number one spot. In approaching one of them, Rupert Grimm, he inadvertently gives away the names on the list and unleashes Rupert's murderous plan to eliminate the competition, not by bribery however, but by murder. In the end, it is Rupert who is the victim of suicide when he is caught trying to kill number four on the list, Kirby Watts, Gabriel's love interest. Ironically, Gabriel is able to admit to his parents that he does not want to go to medical school after all and marries Kirby, who becomes the next Higgs at Johns Hopkins, where fate has accepted Rupert Grimm as the first cadaver of the semester.

Animal action is minimal in the film. In the opening credit shots, establishing winter at the undergraduate school, there is a shot of a black dog digging in the snow and barking. Also in the opening sequence there is a close up of a cat in a doorway. The next shot is of a white rat scampering down the corridor, followed by a shot of the cat charging out of the door and down the hallway after the rat. In reality the cat and the rat were not filmed at the same time. Later in a scene in the college laboratory, white rats are shown in small mazes being made to respond to buzzers. A mischievous student turns up the electrical charge in the buzzer so that when the professor demonstrates the experiment, sparks fly. This scene was also shot in cuts showing first a close up of the rat in the maze. When you see the sparks fly, it is a low angle shot showing only the outside of the maze box and the professor. Prior to this shot, the rat had been removed from the maze. The smoke and the sparks were special effects created mostly with lights As the story progresses, Gabriel bribes the students on the waiting list to withdraw, making it possible for him to climb closer to the top. One of these greedy students is Amanda Morel who takes fifty thousand dollars ($50,000) for her withdrawal and goes home to celebrate. At home she cuddles her little dog, Bubbles, on the sofa bragging about her new found wealth. Her roommate appears in the doorway and Bubbles goes to her feet yapping and annoying her. As she is about to kick the dog, Amanda shouts not to attack her Bubbles and the roommate retreats back into the bedroom. The dog responded to the trainer's voice commands and backed away from the roommate when called, as the actor was threatening it. The little dog then jumps back on the sofa with Amanda who has just received a pizza delivery. As Amanda collapses dead from the poisoned pizza, her dog watches her. The camera cuts to a close up of Bubbles who is now wolfing down the pizza from the box on the table. You assume the dog dies from the poisoned pizza meant for her master as she is never seen again in the film. However, her death is never shown on the screen. In a later scene, Gabriel invites Kirby to his parents home. Kirby is impressed with the Higgs mansion and as she and Gabe start to neck she suggests they go skinny dipping in the pool. As they run through the garden discarding their clothes, they turn a hedge wall only to find the Higgs' and a gala party assembled as a surprise for Gabe. Standing there embarrassed, Kirby grabs a party pennant and a flag to cover them. A small black dog jumps up on Gab's legs trying to pull away the pennant. For this the dog was responding to the trainer's command of "Take it."