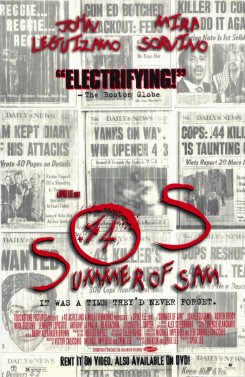 During the "summer" of Sam in July, 1976, the murderer, Son of Sam, terrorized the people and neighborhoods of the Bronx and Brooklyn in New York. The film centers on the lives of some of those in the neighborhood and how the heat of passion and fear effected them until the murderer, real name David Berkowitz, was captured a year later around the anniversary of his first crime.

What was his motivation? The dog made him do it! The real "Son of Sam" accused a dog of telling him to commit the murders. This dog had been a source of annoyance to Berkowitz and, in the film, he tries to kill the barking canine by shooting at it from his window. However, the spirit of the dog returns to haunt and taunt him into a murdering mind set. In the scene where he appears to shoot the dog, the scene was shot in cuts and no live animal was actually harmed.