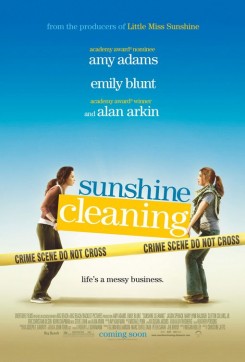 In order to raise the tuition to send her young son to private school, a mom starts an unusual business -- a biohazard removal/crime scene clean-up service -- with her unreliable sister.

Flies and Worms Rose (Amy Adams) enters a fly-infested crime scene in a trailer. For this scene, the bug wrangler released about 100 houseflies into the scene moments before filming. After the flies had a chance to disperse throughout the trailer, the wrangler released another large group of flies. They all flew around and did whatever came naturally. When Rose appears to swat at them on the window, this action was pantomimed and the actress never actually touched the flies. Later in this scene, Rose picks up a paper bag off the floor, turns it around and sees it covered in what appear to be maggots. She throws the bag into a garbage can. For this scene, the bug wrangler placed several worms on the outside of a bag and set it on the floor seconds before filming. After the actress, who was instructed on the proper handling of the worms, picked up the bag and threw it into the can, the wrangler carefully gathered all the worms up and put them back in their habitat. Kitten A kitten runs out from under a bed and out of the house, where it appears to run under a parked van. Norah (Emily Blunt) grabs it from under the van and pulls it out. When Norah realizes that the house is on fire, she sets the kitten on a pile of equipment in the back of the van. This scene was filmed in separate shots. For the shot in which the kitten runs from under the bed, the kitten was placed on its mark and held in position. Once released, the kitten ran under the bed and through the bedroom a few feet to a c alling trainer. For the shot in which the kitten runs from the porch to the van, one trainer released the kitten on the porch while another trainer near the parked van called the kitten. The kitten then ran into its crate, where a food reward was waiting inside. The actress then ran the same path as the kitten, making it appear as if the actress was chasing it -- in actuality, they were not in this part of the scene together. Later, while the house is on fire, Norah sits in the van petting the kitten. For this mild action, trainers instructed the actor on the proper handling and petting of the kitten, which was kept in the secured van a safe distance from the fire.