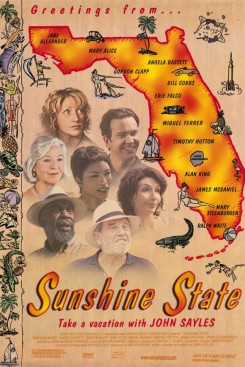 Set in the "Sunshine State" of Florida, an ensemble cast featuring Edie Falco and Angela Bassett brings to life this John Sayles-directed drama about property and family.

American Humane Association did not supervise Sunshine State on set, but was notified about the production and discussed the animal action during filming. After screening the film, AHA obtained supplemental documentation from the distributor and production. AHA is rating the film Believed Acceptable based on this information.

The caged alligator in the film was supplied by the Alligator Farm and Zoological Park located in St. Augustine, Florida.

Per production, it is the only place in the world housing all 23 species of crocodilians and a supporter of the Species Survival Plan. As a member of the American Zoo and Aquarium Association, they are also working with other zoos to reintroduce the extremely endangered Chinese alligator into the wild within the next 10 years. In business since 1893, they have been involved in television and motion picture projects over the years including Late Night With Conan O'Brien, Good Morning Jacksonville, and National Geographic Specials.

Greyhounds As Pets, an adoption organization supported by Jacksonville Greyhound Racing, Inc., provided the two dogs in the film. While on location, the two dogs hung out in their air-conditioned dressing room and were filmed playing on the beach and lounging inside of a beach house. After filming, the two dogs found a caring owner and were adopted.

In lieu of a location and talent fee, the production agreed to make a donation to Greyhounds As Pets to help rescued Greyhounds find permanent, loving homes. Production filmed races that were already scheduled at the track; no races were staged for the film.

The fish in the bar aquarium were supplied and maintained by a local Florida company.