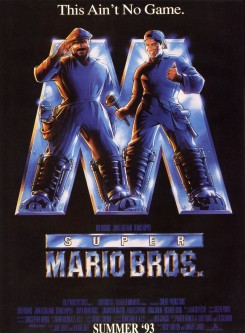 Super Mario Bros. is a preposterous story of how two brothers, Mario and Luigi Mario, save the world from being merged with a world of another dimension. Mario and Luigi are hard working plumbers in their own company, Mario Bros. Plumbing. They have a tough time making a living because Scapelli Plumbing always beats them to any perspective job sites. Scapelli has just purchased some land for development, but a group of archeology students have discovered dinosaur bones at the site, preventing Scapelli from building. He is more than a little upset and confronts Daisy, the head of the students, and indirectly threatens her. Daisy leaves the site to go into town and call for assistance. When she arrives at the pay phone, she meets Luigi, who is immediately smitten with her. The two brothers become involved with Daisy and the dinosaur project, only to find out that Daisy is actually from another dimension. The trio make this discovery in the caves of the excavation site when two thugs sent from this other world kidnap Daisy and take her back to her world via an opening in the cave. This forces the brothers to follow in order to save her. When they arrive in this bizarre world, they realize that they must save more than just Daisy, as she holds the key to merging their world and hers. The unfortunate part is that her world is lead by an evil man who is half dinosaur and half human.

Animal action is minimal. In one scene as the two worlds are about to become one, a dinosaur man takes a transforming machine and changes a man into a chimpanzee. This was done with special effects. When the transformation is complete, the man, now a chimp, stands there in his oversized suit and jumps up and down. For this the chimp followed verbal commands from his trainer, who was out of camera range. In another scene a woman carries her pet snake on her arm. The snake's handler played the part of the actress and merely held the snake. Another scene shows one of the dinosaur men Bar-B-Queing lizards on a stick and eating them. These were fake lizards.