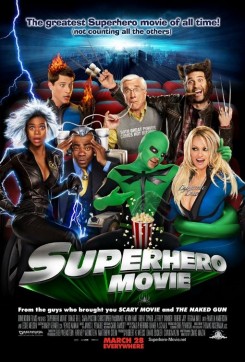 In this parody of superhero movies, Rick Riker (Drake Bell) finds himself with strange superpowers after he is bitten by a genetically altered dragonfly.

A monkey in a hat and costume dances in the street while a crowd of people watch. For this shot, a costumed trainer placed the monkey on its mark and stood in the front of the crowd. The trainer then cued the monkey to dance, spin and kick. The monkey was on a waist tie, which was held by the trainer the entire time, and its costume was custom-made to fit comfortably. The cast and crew were instructed on handling the monkey properly and remained silent during this scene. All noises were added in later.

An elderly woman walks a Pomeranian on a leash across a street. For this mild action, the actress was instructed on the dog's proper handling and the street was closed off to traffic. Actors and stunt people drove cars in the background, a safe distance from the dog. When a truck appears to be driving head-on toward the woman, this was achieved with a camera trick, and the dog had already been removed from the set. Moments later, the dog's leash is dangling from a wood chipper, and the dog is on the ground, attached to the end of the leash by its collar. As the scene continues, the dog appears to be pulled upward by the leash into the wood chipper. It hops on its hind legs and then dangles in the air, being raised up until it reaches the edge of the chipper. For this well-rehearsed scene, the dog was securely equipped with a harness, which was attached to the leash. One trainer held the dog on its mark while the leash's slack was tightened, and another trainer hid near the prop wood chipper. When the cameras began rolling, the trainer on the ground released the dog on its mark and the trainer hiding near the chipper gently and slowly pulled the leash upward, stopping when the dog approached the lip of the chipper. Off-screen trainers cued the dog to "wiggle" and "bark" to make it look like it was struggling. Takes were limited. The dog was rested between takes, and several trainers stood nearby as a precaution.

The homeless dog drinking from a paper bag in the alley was a stuffed prop.

Trainers equipped monkeys with leashes and placed them on branches. The trainers tied their leashes to the branches so the monkeys had enough room to move around but not get down. Cast and crew were instructed to keep the noise level down and to stay away from the animals. One actress was handed a rabbit and instructed on its proper handling. The rabbit was retrieved right after filming. All other animals were placed on their marks and either cued to stay (with commands or food) or secured on their marks with a comfortable waist tie while their trainers stood nearby. Each animal or species had its own pen or area to stay in. Custom-made cages or barricades made of prop plants and fake rocks kept the animals in their respective areas. When the bird bursts into flames, it was a fake bird. When the rabbit, bird and beaver land on Rick, they were fake animals. For the portion of the scene in which livestock, llamas and other animals enter the room through a large doorway, rubber mats lined the animals' path. Several trainers surrounded the animals; some prodded and "drove" the animals away from their starting marks and others called the animals with food rewards and retrieved them at their end marks. Smaller animals were placed last in the pack so they would not get trampled by the larger animals. The dragonflies and snail in the research center were computer-generated imagery (CGI).

The bees in the hive that break free and fly around the science exhibit were CGI. The "love birds" that fly around Rick and are disintegrated on a fence were also CGI. The caged bird that falls over when Aunt Lucille passes gas and the bird that hits Jill while she is falling off a tall building were both stuffed props.

Due to late notification or limited resources, American Humane did not monitor some of the dog action or any of the pig, duck, fish, cat or kitten action.