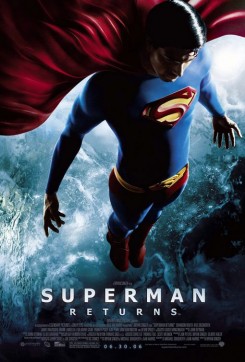 After an unexplained absence of several years, Superman returns to earth to find arch enemy Lex Luthor (Kevin Spacey) out of prison and plotting to destroy the Man of Steel (Brandon Routh) forever. As if that weren't bad enough, Clark Kent must also face the fact that the woman he loves, Lois Lane (Kate Bosworth), is engaged to another man and has moved on with her life. As Clark grapples with finding Superman's place in society again, he must also stop Lex Luthor from wreaking havoc on the world.

Two Pomeranians—Mr. Raffles and Miss Molly—accompany Lex's paramour, heiress Gertrude Vanderworth (Noel Neill), in the opening sequence of the film. When Gertrude dies in bed, one of the dogs licks her hand. Trainers acclimated the dogs to cast and crew prior to filming and provided handling instructions to those actors working directly with them. For Gertrude's final passing, a trainer positioned the dogs on the bed and used hand signals to cue their movements. To attract those loving canine licks, Neill smeared her hand with baby food.

One of the dogs spends much of the movie in the arms of Kitty, played by Parker Posey.

The other Pomeranian has disappeared, as explained in a scene where one dog gnaws on a bone while hair litters the ground around it. Both the fur and bone were fake, and the bone was coated with delicious baby food. Scenes with the dog on Lex Luthor's boat and helicopter were filmed in front of a green screen—the Pomeranian never took to the skies or sea.

In one scene, Clark Kent's (Brandon Routh) Labrador retriever is seen lying in the house as the house begins to shake. A trainer put the dog on its mark and stood off camera using verbal cues to direct the Lab to get up and walk under the table. The shaking was a special effect; the room never moved at all. Later, the Lab follows Clark outside and runs after a ball that his owner has tossed. Since fetching is one of this dog's favorite games, trainers had no difficulty getting the Lab to run after the ball. The tough part was making the dog stop before retrieving it, as the gag is supposed to be that Clark's bionic throwing abilities have dampened the Lab's enthusiasm for playing catch!