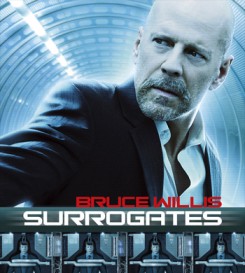 In the future, humans don't leave the house but instead, use virtual reality to control their cyber-surrogates, who walk the streets on their behalf. But a series of murders forces police agent Greer (Bruce Willis) to walk the streets without his surrogate for the first time in years.

As Greer (Bruce Willis) walks around the humans-only "dread territory" village, a horse with a rider pulls a cart down the road. The area was secured and checked for hazards. The road was closed off to traffic. A costumed trainer rode the horse a short distance and the cart carried lightweight produce that the harnessed horse was accustomed to pulling.

American Humane also monitored goats, dogs and chickens milling around in the background at the dread territory village. Footage of these animals was cut from the theatrical release but might appear on the DVD.

Production provided documentation for the stock footage of the chimps seen in science labs in the opening credits.