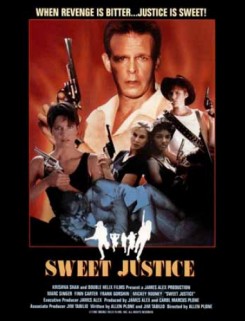 Sweet Justice is the stage name of Sonny, a female kick-boxer. This is the story of how she re-unites a special secret service force that the government had put together for defence purposes, but had never used. They are Chris, Heather, M.J., Josie and Kim, all women, and all lethal. Sonny does this so that they may go to the small town of Los Olivos and avenge her sister Suzanne's murder.

Sonny gets word of Suzanne's death and knows in her heart that this was no accident. Her thoughts are confirmed when she receives a letter from Suzanne, post marked the day of her death, telling Sonny about the illegal things going on in the town of Los Olivos and the man who is the responsible for it all, Rivas, or so Suzanne thinks. Sonny immediately looks up all of her comrades of the special forces and together they reek havoc on the unsuspecting town.

In one scene Suzanne returns home from work to her darkened house. She hears a noise outside and goes to investigate. When she does, she discovers her cat lying on the ground, dead. As Suzanne leans down toward the cat, a German Shepherd bounds out of the darkness, knocking her to the ground. He attacks Suzanne, killing her. A fake stuffed cat was used for this scene with stage blood (make-up) placed on the "fur". The dog was trained with verbal commands and food rewards to grab the arm of the actress and hold on as the actress simulates a struggle. The dog then lets go of the actress' arm and supposedly goes for her throat, delivering the death sentence. Camera angles were used to achieve that appearance. The dog does not actually bite or grab the woman's neck. With the camera at his back, the dog simply moves his head up towards the woman's face and obeys the verbal command of his trainer to "give her a kiss". Growls and snarls were added in post production.

In another scene Steve, the Sheriff, is talking to Sonny out by the pool when out of the yard comes Shatzie, the same German Shepherd. Steve tells Shatzie to attack Sonny. Sonny jumps in the pool but the dog will not follow. Steve becomes irate with the dog and punches the dog in the face. This causes the dog to attack Steve, killing him. The dog was never hit. A shot of Steve is seen, through the eyes of the dog, where Steve actually punches into the camera lens. The attack scene was done exactly as was the first attack scene, with growls and snarls added in post production. Fish swimming in an aquarium are also seen in one scene as atmosphere.