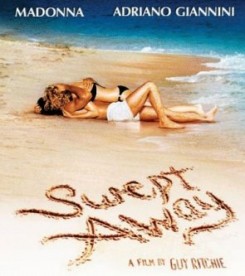 Swept Away is a remake of the popular Italian film by the same name about a spoiled socialite, Amber—here played by Madonna—who finds herself stranded on a desert island with a blue-collar shipman named Giuseppe (Adriano Giannini).

AHA was not notified of the filming of this project and, therefore, did not monitor the animals in the film. AHA was granted a screening of the film and submitted questions to the producer as to how the animal action was achieved. The information in this review is based on the information obtained from the producers. Since AHA cannot confirm nor deny that this information is accurate, AHA is rating the film Unknown.

Per the producer, for all the scenes on the beach in Sardinia, the fish were obtained from a local fisherman's catch that he had caught for the market.

While on the yacht, Giuseppe walks down a hall with a dead fish slung over his shoulder. This fish was bought dead from a London fish market.

While adrift at sea, Giuseppe appears to catch a small fish with his hands, hands it to Amber who takes a bite of it and throws it overboard. This small fish was actually made of marzipan.

On the island, Giuseppe carries a fish and a lobster that he caught, still on the spear. This fish and lobster were bought dead from the local fisherman and were filmed being eaten on the fire.

Another wiggling fish has a spear through its body. This fish had been bought from a local fisherman's catch dead and was later eaten.

Giuseppe throws an octopus at Amber and Amber is later seen "tenderizing" an octopus by thrashing it and rubbing it against the rocks. Amber also throws an octopus onto Giuseppe chest. The octopi were bought dead from the local fisherman's catch.

Amber kisses a fish that has a spear through its body and the fish flinches. The fish was bought from the local fisherman's catch.