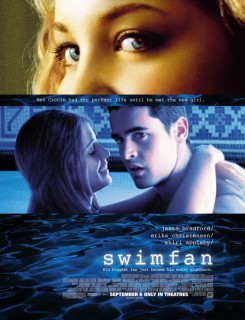 In this thriller, star high-school swimmer Ben Cronin (Jesse Bradford) has his Olympic dreams shattered when a tryst with the new-girl-in-town, Madison (Erika Christensen) turns ugly. Madison becomes obsessed with Ben, claiming to be his #1 swim fan while also plotting his demise. Fortunately Madison's evil plans do not include Ben's lovable pooch, Mickey, who lazily lounges around throughout most of the film, oblivious to his owner's girl troubles.

Mickey, a 4 year-old male terrier mix, achieved his action on-screen with the help of an off-camera trainer. The trainer placed Mickey on his mark and cued him to "stay," reinforcing the command with hand signals. To get Mickey to look in certain directions, the trainer attracted his attention by calling him from off-camera.

When Mickey wasn't taking cues from his trainer, he was happily gobbling up treats from the actor who plays Ben, Jesse Bradford. Bradford fed his canine acting partner table scraps and dog treats both during the scenes and between, much to Mickey's delight. Of course, having a full stomach enabled Mickey to realistically achieve those languid poses on the couch, sometimes even inspiring him to nap—something he felt his character would do.