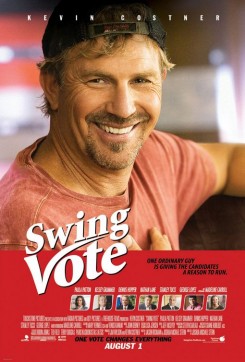 The presidential race is so tight that after the election ballots are tallied, it comes down to one man's revote. That man happens to be an unemployed, beer-guzzling, deadbeat dad whose mature and highly intelligent daughter takes care of him. Now the fate of the nation is in his hands, and the two candidates vie for his vote.

Outside an egg-packing plant, a forklift transports several chicken cages stacked on top of each on a pallet. This brief scene used custom-made wire cages divided into two sides. One chicken was placed on each side, so although each cage contained two chickens, they could not bump into each other. The cages were then secured to each other and to the pallet using strong, sturdy zip ties. An experienced forklift driver drove the forklift very slowly, for a short distance.

Before the presidential debate begins, a woman rides a horse around a rodeo ring. The experienced rider cantered a barrel-racing horse around the arena and waved at the crowd while the horse's owner stood just off-camera. Arena grounds were inspected beforehand and the horse was accustomed to this mild action. The overhead angle of this action was filmed using a helicopter camera, but the helicopter was kept a safe distance from the arena so as not to startle the horse.

During the scene in which Bud (Kevin Costner) and his daughter are fishing, there is a close-up shot of a hook being threaded through an earthworm. A rubber worm prop was used in place of a real worm, and the fishing hook did not go all the way through it, to prevent any actual fish from being hooked or harmed. No fish fell for the fake bait.

American Humane also monitored additional scenes with a chicken, a horse, an elephant and a coyote which were cut from the theatrical release but may appear on the DVD.

Swing Vote does not carry the "No Animals Were Harmed" disclaimer at the end of the film because the production did not give American Humane a pre-release screening of the film.