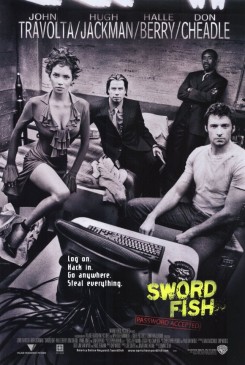 The world's most dangerous spy, Gabriel Shear (John Travolta), a charismatic, multifaceted man, hired by the CIA to coerce a computer hacker, Stanley (Hugh Jackman), who was recently released from prison to help steal $6 billion in unused government funds. In exchange, Stanley can regain custody of his daughter and start a new life.

No animals were harmed in amassing this big catch. The funds are part of a covert government operation — codename "Swordfish"!

Stanley and his girlfriend Ginger are having a conversation when a dog appears at Ginger's side. She pets the dog as they converse and then Stanley opens up the truck door and calls to the dog who happily jumps into his seat. Both actors were introduced to the dog, Scrappy, who is a 10 year old Terrier mix. The trainer released the dog and using visual cues, instructed the dog to walk over to the actress and sit. The trainer then moved to the other side of the truck and cued Scrappy to run and jump into the truck. The trainer retrieved the dog and rewarded it with a treat when the scene was over.