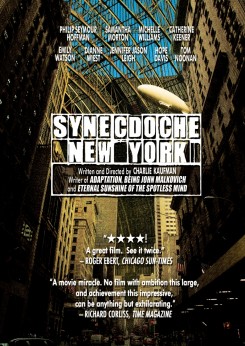 A theatre director struggles with his work, and the women in his life, as he creates a life-size replica of New York City inside a warehouse as part of his new play.

Dog As Caden talks to Hazel (Samantha Morton) at work, a dog lies on a couch behind her. For this brief and mild scene, a trainer placed the dog on the couch and stood just off-camera, using hand signals to get the dog to sit up and look in different directions. Rats As Caden leaves his apartment, he walks by some rats crawling around in the corner of the hallway. Six rats were used for this scene. Trainers placed a bottomless cardboard box near the corner of the hallway and set the rats inside. The trainer lifted the box off the rats when filming began, allowing them to wander around naturally, and retrieved them right afterwards. Trainers stood off-camera with a net in case any of the rats decided to wander too far. This secured indoor set was thoroughly inspected for safety ahead of time. Only necessary cast and crew were allowed on set for this scene. American Humane monitored some additional dog action and some pigeon action, which do not appear in the theatrical release.